Is There a Disadvantage for NFL West Coast Teams Traveling East? 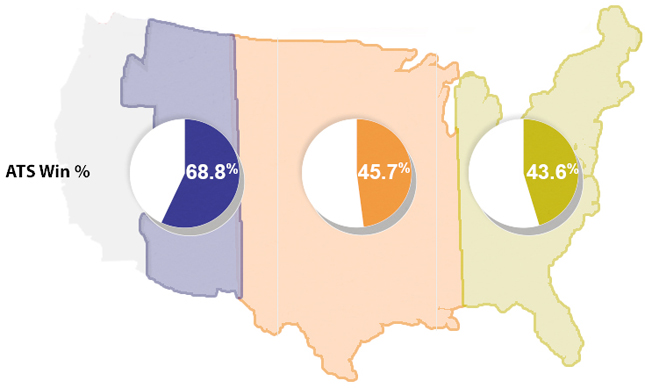 Is There a Disadvantage for NFL West Coast Teams Traveling East?

When making predictions, ranking fantasy football players or justifying betting decisions, experts love turning to generic theories to backup their opinions. However, when using these concepts, experts often conveniently forget to back these theories with data and statistics.

Over the last couple of years, we’ve taken it upon ourselves to do the legwork and prove whether mainstream theories are actually based in truth. For example, we busted the myth that cold weather means lower scoring and have also confirmed that NFL teams do play better when coming off a bye.

One trendy concept being used by the media is that NFL West Coast teams traveling east suffer declines in performance. It’s certainly reasonable to hypothesize that the combination of long flights, strange beds and time zone changes confuse internal body clocks and prevent players and teams from performing up to expectations.

[ This trend hasn’t persisted over the past three years. Check out the latest results. ]

With this in mind, we used our Bet Labs data analysis software to examine the theory of West Coast teams traveling east and determine just how truthful it is. To start, we had to first find a way to measure expected performance. Similar to our Monday Night Football analysis, we can’t use straight up wins and losses since they don’t provide a realistic measure of performance. For example, San Diego is traveling to Jacksonville this week as 7.5-point favorites. Since 2003, favorites of -7.5 and greater are 543-108 (83.4%) straight up, so concluding that a San Diego victory alone meant they met expectations would be incorrect.

Instead, we can use against the spread (ATS) records as a much better indicator. It’s safe to assume that the favorite in each matchup is “expected” to be the better team and the actual size of the spread defines “how much better” the favorite is expected to be. Therefore, we would define a 3-point Chargers victory as underperforming since they did not cover the spread. Conversely, a 10-point win would cover the 7.5-point spread, indicating that San Diego outperformed expectations and “played well” against Jacksonville.

With our measure of performance defined, we compiled ATS records for the four NFL teams located in the Pacific Time Zone (San Francisco 49ers, Oakland Raiders, San Diego Chargers and Seattle Seahawks) when traveling to play in the Mountain, Central and Eastern Time Zones.

The table below displays the results, since 2005:

Interestingly, ATS performance of Pacific Time Zone teams gets progressively worse as they travel further east. Based on these results, we can conclude that West Coast teams don’t meet expectations and therefore “play badly” when traveling to the East Coast.

While we have achieved our original goal by confirming this concept, we decided to now look at this from a betting theory perspective in order to learn how to take advantage going forward. Using the analysis above as a baseline, we also tested other scenarios and found that Pacific Time Zone teams traveling east perform even worse after covering the spread in their previous game.

The table below displays ATS records for Pacific Time Zone teams, coming off an ATS victory in their most recent game, dating back to 2005:

For the record, this added wrinkle is not related to the teams’ actual travel, but is instead a reflection of betting market overreaction. The betting public tends to focus on recent results and will back teams that covered the spread in their latest game. In turn, oddsmakers react by shading lines, forcing bettors who like these teams to take them at bad numbers.

Sharp bettors wait for these market overreactions and take advantage by betting against the Pacific Time Zone teams, knowing they only cover the spread at a rate of 29.6%.