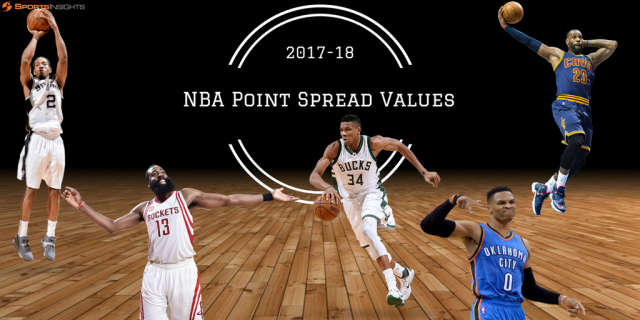 Basketball can be a frustrating sport for bettors and daily fantasy players. You place your bets, set your lineup, and then all of the sudden, Coach Pop announces that Kawhi Leonard and LaMarcus Aldridge are going to rest.

This pisses fans off and in fact, there is even a prop bet at Bookmaker.eu regarding whether a team will get fined for resting healthy players. More importantly, though, millions of dollars can change hands in the gambling and DFS industries thanks to that decision and the line moves that follow.

Like football, basketball lines can change drastically depending on who plays or not. The only big line moves in the NFL are caused by quarterbacks, but in the NBA, all five positions matter.

In a moneyline sport like baseball and hockey, key positional players are only going to move a line five to ten cents, but key NBA players can move the spread by five points—sometimes more depending on how the market reacts. For example, let’s say the Cavs are -8, but LeBron ends up resting and the line moves to -3. That move would correspond with nearly a 20% swing in implied odds. Even if Mike Trout sits a game out, the line movement would only correspond with a 1-2% swing in implied odds.

As we have done in years past, we’re going to take a look at which NBA players can move a line and more importantly, by how much. Below are the five “tiers” and how many points a line would generally move if a player in that tier isn’t playing.

To help decide who belongs where, I got in touch with Scott Cooley, an odds consultant at Bookmaker.eu, and William Bernanke, lead data analyst at CG Technology. One offshore book, one Vegas book, two slightly different opinions on the matter.

These tiers should be used as guidelines, but the point values are not set in stone and can vary from game to game. As Bernanke says, “Lebron James’ value to the spread will be in full effect if the Cavaliers are playing a top tier team (like the Warriors), but if the Cavs are playing a lower tier team (like the Bulls), his value would diminish as in many cases he would be expected to sit out the 4th qtr of a blow out.”

Also, public perception plays a large role. A sportsbook could move their line four points with Russell Westbrook sitting out, but bettors could move it even further. We’ve also seen situations where a team like the Cavs will rest all of their star players…I’d hate to have tickets for one of those games!

For example, last December, Cleveland rested the entire “Big 3” on the road against the Grizzlies. Though the sum of James, Irving, and Love’s individual point spread values was only 8-9 points, the line moved from Cleveland -7.5 to Memphis -7…a lot more than 8-9 points. According to Cooley, “When a team rests all of its stars we tend to inflate the adjustment a tad, and then the public overreacts and moves the number even further.” That was exactly the case for this game, as that line initially moved from CLE -7.5 to MEM -3.5 before being further moved by public perception.

Below are the tiers from each book along with what they were viewed as last year.

Keep in mind, this isn’t a list of the best players ranked in order. A player’s teammates plays a huge role in how much they are worth and with so many stars joining forces, many players’ values are lower than they would be if they didn’t have a strong supporting cast.

Last year, Russell Westbrook was a tier one player and rightfully so. The dude averaged a friggin triple double. In the one game he did miss, the second to last game of the season, the line ended up moving six points. However, with Paul George and Carmelo Anthony joining him this year, the Thunder won’t be as screwed if Westbrook takes a rest day or has to sit out due to injury because there are other star players to pick up the slack.

Similarly, James Harden, who surely would have been bumped up to tier one this season, remains at tier two due to the addition of Chris Paul.

These can also change as the season progresses. Giannis Antetokounmpo is a great example of this. Last season, he began as just a tier five player worth one point to the spread and now, he’s one of just three tier one players worth five points to the spread. That didn’t just happen overnight, though, as his value steadily grew over the course of the season.

Though the two books agree on most players, there are some notable differenecs. The two that will likely stick out the most are Steph Curry and Kevin Durant. Does it hurt the Warriors’ chances of winning if Curry or Durant has to miss a game? On most nights, no, not at all. Their roster is just too damn stacked for it to impact the outcome of the game.

Both players have won the MVP on their own and together, they help form the core of one of the most formidable super teams ever. Bookmaker believes Durant is more valuable, while CG Technology actually swapped Curry and Durant based on how the line moved when the players missed action last season.

Here are other notable changes CG Tech made based on line movement analysis and change of scenery.

Interestingly enough, Bookmaker disagrees on all six of those players. One that stuck out in my mind was Lillard, who I felt should definitely be a tier two player. According to Cooley, though, it isn’t really a knock on Lillard. “I think it’s more about the state of the Blazers team than Lillard himself. I’m expecting this team to take a step back this year in the West, with seemingly every team around them getting better. Lillard can still be worth 4 points at times, but that’s why I dropped him.”

The Celtics are another team that caused some disagreement amongst the books. Bookmaker thinks that Irving and Gordon Hayward, who surprisingly didn’t make the list last year, are essentially viewed as equals. However, CG Tech believes that Irving, who should be responsible for more offensive production, is the clear number one option on the team. Al Horford, the all-around, space-creating center, is nowhere to be found on the list.

Another development that will catch the eye of Celtics’ fans is CG Technology’s omission of Isaiah Thomas, who was 5th on the MVP voting list last year, but not one of the 53 players they listed deemed most valuable to the spread this season.

According to Bernanke, “…we didn’t factor Isaiah, as he is projected to be out until late December as of current reports. Isaiah would have been worth around 3 points last year (on the Celtics), as he was so vital to the starting line-up. If he would have come into this season healthy on the Cavs, he would have maybe been worth a point, but the Cavs have the bench players and super stars to overcome a player like Thomas being out.”

Which players do you think should be higher or lower? Any missing names that you think deserve to be on the list? Any players you expect to take a monumental leap like the Greek Freak did last year?