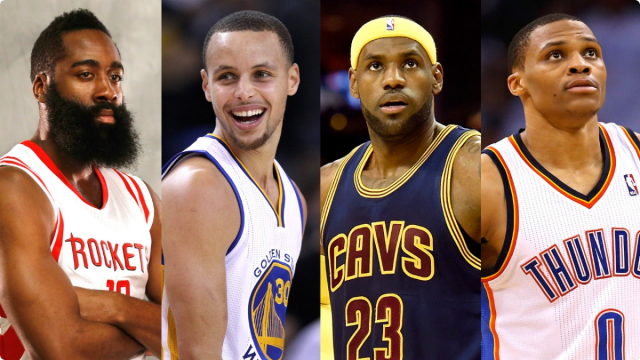 Last season during the first round of the NBA Playoffs, Golden State Warriors superstar Stephen Curry twisted his ankle in a victory over the Houston Rockets. When it was announced that Curry would be out indefinitely due to this injury, the Warriors moved from -12.5 to -8.5 in their Game 2 matchup. This line movement indicated that Curry was worth 4-points to the spread; however, he was not considered the most valuable player in the league.

“[Curry] is not worth the most points in the league as that designation still belongs to the King. We’d put LeBron’s value at 5-6 points, depending on the opponent,” stated Scott Cooley, an Odds Consultant for the market-setting Bookmaker.eu. “James brings a broader asset range than Curry given his rebounding and defensive acumen. You also have to assess the complimentary players and depth of the bench. Obviously, the Cavs are a completely different team without James while the Warriors can still compete at a high level without Curry.”

Whenever a star player suffers an injury or sits out for rest, sportsbooks are forced to adjust the spread on the fly. Oddsmakers take many factors into consideration when adjusting the spread including the opponent, the quality of the backup and the overall talent on the roster. As an example, Anthony Davis is far more valuable to the spread than Blake Griffin even though they’re comparable talents. That’s because the Clippers’ supporting cast includes perennial All-Stars like Chris Paul and DeAndre Jordan while the Pelicans roster is devoid of talent.

Similarly, it’s interesting to note that Kevin Durant was worth 4-5 points to the spread last season, which made him one of the league’s most valuable players. After signing with a loaded Warriors team, Durant’s point spread value declined significantly. Even if Durant missed significant time, the Warriors would still have three All-Star caliber players in Curry, Draymond Green, and Klay Thompson. According to Cooley, Durant’s departure from Oklahoma City caused his spread value to drop by roughly two points.

Before the start of the NFL season, I spoke with oddsmakers from several different sportsbooks to determine which players had the greatest impact on the spread. Not surprisingly, quarterbacks were far and away the most valuable position with elite signal callers valued at 6-7 points to the spread. In fact, there are only a handful of non-quarterbacks capable of moving the line. Evaluating basketball players is an entirely different animal, and there are dozens of NBA players capable of affecting the spread.

After speaking with oddsmakers from three different sportsbooks (Bookmaker, CG Technology, and William Hill), I was able to compile the following list of NBA point spread values. These numbers may fluctuate throughout the season, but they provide valuable insight into the methodology of oddsmakers.

It’s important to understand that these valuations are malleable, and can be impacted by a variety of factors. “Player’s worth varies from game to game and situation to situation. There are times in the last three years that LeBron has moved a line as much as 9.5 to 10 points. There are also times when he moves the number as little as 1-2 points,” according to Matthew Holt, Vice President of Business Development for CG Technology.

“[Against] a tanking Philadelphia team on the road at Cleveland last season or a tanking Brooklyn team on the road this season LeBron is likely only worth 1.5 to 3.5 points as they don’t need him anyway and he likely wasn’t going to play a full compliment of minutes anyway,” Holt continued. “The road team is tanking in both cases so they are trying to lose.”

“On the other hand, if Cleveland is at Boston in February and just a game or two separates both teams for #1 seed LeBron could easily be worth 6-8 points,” Holt elaborated. “All that, of course, is assuming the rest of the players for both teams are at full strength which they seemingly almost never are.”

Holt contended that attempting to give players in any sport a standardized point value is often times an exercise in futility, which is partially true. That’s one of the reasons I opted to create tiers in order to evaluate which players have the greatest impact on the spread. Depending on the situation, players from Tier 1 and 2 are capable of moving the line between 2-6 points — bettors just need to be cognizant of the situation.

Based on these valuations there are four teams who don’t have a single player capable of moving the spread: the Philadelphia 76ers, Los Angeles Lakers, Dallas Mavericks, and Denver Nuggets. Even though Dirk Nowitzki averaged over 18 points per game last season, his defense has been steadily declining. Books may adjust their spread to account for public perception, but Nowitzki is no longer an impact player. The same can be said about household names like Derrick Rose or Dwyane Wade.

Public perception definitely contributes to a player’s spread value, and sportsbooks will often shade their number to mitigate risk and limit liability. When a superstar player is ruled out, bettors often overvalue the significance of his injury and hammer their opponent. For example, the majority of public bettors would likely fade (bet against) the Pelicans if Anthony Davis were ruled out. In that instance, oddsmakers may adjust the spread by more points than Davis is actually worth in order to force casual bettors into taking a bad number.

Throughout the season, championship contenders like the Cavaliers, Spurs and Warriors are expected to rest their veterans with limited notice. By knowing the true value of these key players, bettors can quickly determine whether oddsmakers have overreacted or underreacted. When dealing with an existing injury, bettors have additional factors to consider.

For what it’s worth, there were some disagreements among the oddsmakers. Although every oddsmaker stated that Kevin Durant’s point spread value dropped after leaving Oklahoma City for Golden State, some valued Durant at 2-3 points while others valued him at 3-4 points. There was also some debate regarding whether Klay Thompson or Draymond Green were more valuable to the Warriors.

The list below details the players with the greatest disagreement between oddsmakers:

It’s also worth noting that last season LeBron James was the only player worth at least 5-points to the spread, but Durant’s departure caused Russell Westbrook’s spread value to increase by more than a full point. In fact, Westbrook may have surpassed James as the league’s most valuable player. “Without KD, I’m putting Westbrook at the top of the list now,” according to Scott Cooley. “He’s worth 5-6 points in my opinion, same as LeBron, but just a step ahead in totality.”

Some sportsbooks can be slow to react to breaking injury news, so make sure to visit our free NBA injury page for the latest updates. Sportsbook Insider customers can receive these injury alerts instantaneously via email or text message.