The Rise of Jake Arrieta 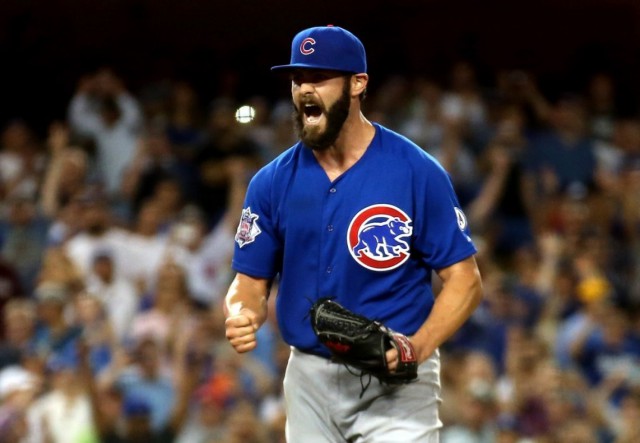 The Rise of Jake Arrieta

On July 2, 2013, the Baltimore Orioles acquired Scott Feldman and Steve Clevenger from the Chicago Cubs in exchange for Pedro Strop and a struggling pitcher named Jake Arrieta. At the time, Baltimore was seeking to bolster their starting rotation and the organization believed that Feldman would help their pitching woes.

It’s hard to believe now, but Arrieta was merely an afterthought back then. In 69 career appearances with the Orioles, Arrieta had gone just 20-25 with a 5.46 ERA and a 1.72 strikeout-to-walk ratio. The 27-year old right-hander had once been considered a top prospect, but there were growing concerns about his control and velocity. In fact, from 2010-2012, Arrieta’s ERA was the fourth highest among all pitchers with at least 300 innings pitched.

Despite these struggles, Arrieta had actually been profitable for bettors. Although he posted a losing record (30-33), $100/game bettors would have earned $351 by taking Arrieta in every start. It’s also interesting to see that Arrieta closed as an underdog in roughly three-quarters of his starts, which helps to explain why on average he received just 35.5% of moneyline bets at our contributing sportsbooks.

Maybe it was the change of venue, maybe it was escaping the American League, and maybe it was something else entirely. Whatever the reason, Arrieta has been a completely different pitcher since being traded. In 75 starts with the Cubs, Arrieta has gone 41-13 with a 2.17 ERA and a 3.84 strikeout-to-walk ratio. Last season, Arrieta posted a 1.77 ERA with 236 strikeouts en route to his first career Cy Young.

As much as Cubs fans may love Arrieta’s incredible transformation, bettors may be even more appreciative. The Cubs have gone 52-23 (69.3%) with +20.33 units won when Arrieta takes the mound, which makes him the most profitable pitcher in our database over that stretch. This high level of success has transformed Arrieta into one of the most popular pitchers in the league.

The table below displays the record, units won, return on investment (ROI) and average moneyline betting percentage since Arrieta was acquired by the Cubs.

In order to fully appreciate Arrieta’s metamorphosis, we examined all 138 of his career starts. The table below, which uses data from the historical archive that powers our Bet Labs software, displays the public betting and closing line for every game of Arrieta’s career.

As you can see, the Cubs have won 20 of Arrieta’s last 21 starts dating back to last season with the lone loss coming in the playoffs against Noah Syndergaard and the Mets. It’s also interesting to see that Arrieta hasn’t been an underdog since July 2, 2015 when the Cubs closed +106 against Jacob deGrom and the Mets. Coincidentally, that’s also the last time that Arrieta received less than 50% of moneyline bets.

This string of phenomenal performances has turned every Arrieta start into must-watch baseball and has put oddsmakers in a very precarious position. In his last game, Arrieta closed -365 which made him the largest favorite since Clayton Kershaw (-375) faced the Phillies last July. Some books are trying to capitalize with unique prop bets.

After throwing a no-hitter against the Reds on April 21st, the Las Vegas based South Point sportsbook listed Arrieta at +500 to toss another no-no this season, with “no” listed at -700. Based on those odds, there’s a 14.29% implied probability that Arrieta will become the sixth pitcher to throw multiple no-hitters in a season.

Despite his rising popularity, Arrieta still isn’t the league’s most popular pitcher — that honor belongs to Clayton Kershaw. On his career, the three-time Cy Young winner has averaged 65.7% of moneyline bets. Since the start of the 2015 season, that number has been slightly higher at 69.2%.

Prior to the start of the 2015 season, Arrieta was listed at +4000 to win the Cy Young award — the same odds as second-tier pitchers like Julio Teheran and James Shields. Entering this season he had the second best odds (+700) of winning this prestigious award, trailing only Kershaw (+175). Based on the early results, anybody who took Arrieta at 7/1 is feeling very optimistic.

In five starts this season, the Cubs ace has gone 5-0 with a 1.00 ERA. Perhaps the most amazing statistic is that opposing batters are hitting just .151 against Arrieta, which is largely due to his filthy slider-cutter hybrid (sometimes known as a slutter). Arrieta’s stock has never been higher, which means this might be the optimal time to fade him.

At Sports Insights, our contrarian philosophy consistently finds value by going against the grain and taking unpopular stances. We recommend buying on bad news and selling on good news to capitalize on public perception. With Arrieta consistently receiving overwhelming public support, the Cubs lines have been extremely inflated every five days.

We wanted to know whether the oddsmakers were seeing similar trends and how public betting was affecting the opening lines, so we reached out to Scott Cooley, an Odds Consultant for Bookmaker.eu. “The Arrieta effect has certainly gained steamed over the past year,” according to Cooley. “Like the Yankees and Red Sox, the Cubs are one of our most ‘public’ baseball teams so we are usually going to shade their lines based on the action we expect to get on them. Arrieta’s success has compounded that further. He’s still not as much of a household name as Clayton Kershaw…but he’s getting to that level.”

Squares, or casual weekend warriors, consistently place wagers based heavily on recent results and they love taking the league’s “elite” teams. Oddsmakers can accurately anticipate the behavior of these bettors and shade their opening lines to force square bettors to take bad numbers when playing the popular side of a game. These shaded lines create additional value for opportunistic contrarian bettors.

We should note that historically it’s been a losing proposition to bet large favorites and large underdogs, which we explain in our 2016 MLB Betting Against the Public report. Although MLB favorites of at least -200 have won 69.4% of their games, that winning percentage isn’t high enough to cover the massive juice that most sportsbooks charge for big favorites.

Bookmaker, which is one of the market-setting sportsbooks, is charging 25 cents of juice on tonight’s Cubs/Pirates game (CHC -195, PIT +170). In contrast, they’re charging 10 cents juice on smaller favorites (i.e. DET -129, CLE +119). The juice is oftentimes prohibitive on large underdogs, which is why we have avoided them in our last three betting against systems.

We don’t recommend blindly betting against Jake Arrieta in every start, but the public’s infatuation with the red-hot 30-year-old has created artificially inflated lines. There are several additional criteria that bettors should examine before placing a wager:

Bettors can also track the latest odds and public betting trends by visiting our free MLB odds page. Looking to create your own data-driven betting systems? Sign up for a free Bet Labs account and create up to five systems.