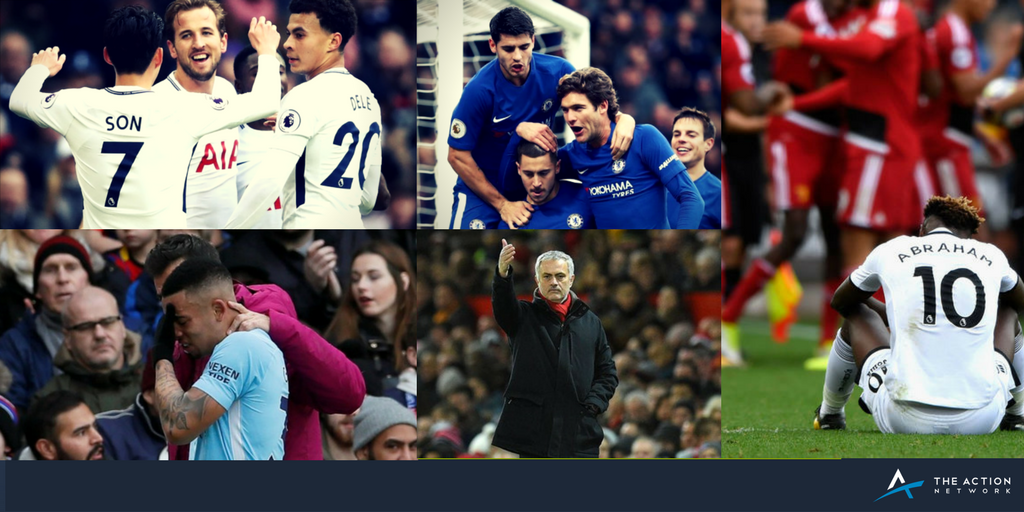 Since there’s no Premier League fixtures this weekend with the FA Cup going on, it’s a good time to catch up on futures like title odds, relegation odds, top scorer and more. Manchester City have been the story of the Premier League season with an 18-game winning streak and they comfortably sit atop the table with 20 wins, 2 draws, and 0 losses. At 62 points, they’re five wins ahead of second-place Chelsea (47 points) and have all but assured themselves champions this year.

Before the season I picked Swansea at +225 to get relegated which is looking great now. But I also thought Burnley would struggle this season and they’ve proven me wrong week-in and week-out.

Harry Kane has been on a tear, again, and I really loved his third goal against Burnley a couple weeks back. He initially plays a good pass which doesn’t quite connect, but then reacts to his mistake to win the ball back, makes a great run toward the goal, one-touches past the defender and then calmly slots it into the corner of the net with his left foot.

Mo Salah is certainly giving Kane a run for his money as top goalscorer this season, but it’s going to be tough to match the consistency that Kane brings. Even when last season’s race looked over, Kane scored seven goals in the final two games to overtake Romelu Lukaku and Alexis Sanchez, and he’s fully capable of doing the same this year.

With nine wins in 22 games this season, Burnley is the most profitable team in the league with +19.54 units earned. Manchester City is the next on the list followed by Huddersfield. It’s no surprise that these three teams are also cruising toward hitting the Over for their season point totals.

On the negative side of things, the worst clubs have been West Brom (-16.26 units), Southampton (-13.86 units) and Swansea (-7.97 units). One big moneyline upset could sway the figures, and West Brom look like they’re capable of pulling one off soon.

On the season, draws have been profitable at +18.56 units earned while road teams have continued to struggle (-27.73 units).

Road teams were really profitable in the EPL for three seasons, then the last two seasons happened:

I hope you’ve been keeping up with the weekly Premier League betting previews as value plays are now up over +30 units on the season. Matches start back up in Week 23 on January 13th and I’ll have a preview ready to go by Friday the 12th. Enjoy the FA Cup this weekend!