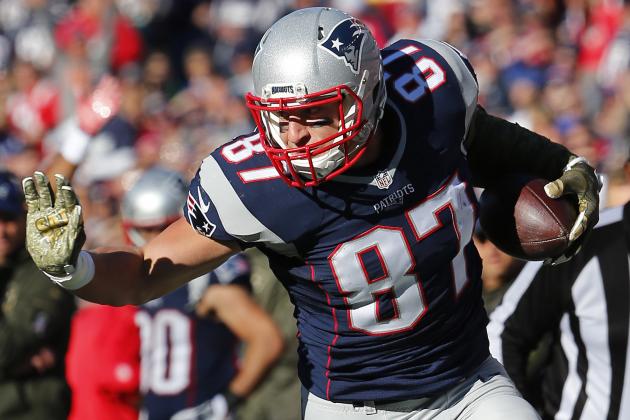 In NFL
By Andrew Fine

The 2016 NFL season is officially underway and Week 1 had a slew of exciting matchups, including six games decided by less than a field goal. The first week was noticeably profitable for road dogs, who went 8-3 ATS with 4.88 units won.

One of the biggest upsets was the New England Patriots, who closed at +9 at the market-setting Bookmaker, defeating the Arizona Cardinals on the road 23-21. Tom Brady (suspension) and Rob Gronkowski (hamstring) were among the notable Patriots missing from Sunday’s prime time game.

Gronkowski’s status for Week 2 remains in question as he continues to nurse a mysterious hamstring injury. He is not the only key player that might not suit up in the second week. Sammy Watkins (foot), Demaryius Thomas (hip), and Jamaal Charles (knee) are all question marks as well.

The table below displays the lookahead lines from April via CG Technology compared to the opening and current odds at Bookmaker. Every week we’ll examine the largest moves and analyze how oddsmakers’ expectations have shifted since the offseason.

Even though it is very early in the season, injuries have influenced many of the Week 2 lines. Since CG Technology released their point spreads in April, a few starting quarterbacks have gone down with long-term injuries. Teddy Bridgewater (knee) is out for the season, while Tony Romo (back) and Robert Griffin III (shoulder) are both sidelined indefinitely. Romo’s absence has pushed the Cowboys to +3 at Bookmaker and for context the game was a pick ’em at CG Technology.

In addition, long before the season started oddsmakers believed Tom Brady would be playing, but instead he’s suspended for the first four games because of his role in Deflategate. The loss of Brady, one of the most valuable players to the spread, has caused the line to shift several points. However, the Patriots (- 6.5) remain sizable favorites in their Week 2 game against the Miami Dolphins in Foxborough.

These numbers are subject to change before kickoff, so bettors should be sure to visit our free NFL odds page for the latest lines, injuries, public betting trends and more.

We would also suggest that customers sign up for a 4-day trial of Sportsbook Insider Pro for real-time odds, public betting trends, Best Bet picks, contrarian plays, steam moves, reverse line movement alerts and much more. Schedule a one-on-one demo with our customer service and we add four days onto your subscription for free!