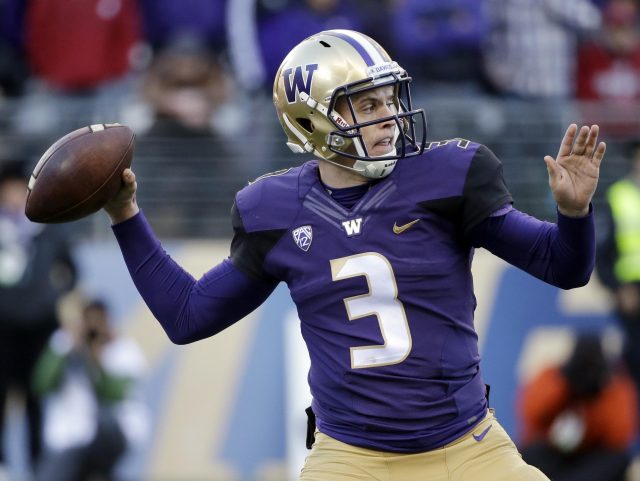 Always fade the public. It’s one of the most basic, yet highly profitable betting strategies. Whenever the public zigs, you zag.

Since the beginning of the 2005 season, we have released a College Football Betting Against the Public Report before the start of each new season which examines the optimal threshold for betting against the public using the ticket percentages from our contributing sportsbooks. Oddsmakers are constantly evolving to adjust for recent trends, and this research ensures that bettors are always one step ahead of the books.

We have archived these ticket percentages for over a decade, however, we are constantly working to add new and innovative features to help bettors make informed decisions and smarter bets. In addition to our public betting percentages, we now offer real money percentages, which reflect the percentage of total dollars wagered at one of the sharper offshore sportsbooks. This feature, which is exclusive to Sportsbook Insider members, allows bettors to easily monitor one of the biggest factors influencing line movement.

Most oddsmakers are able to anticipate which games will take one-sided public betting, so they will shade their opening lines to account for the predictable flood of public money. If the liability becomes too great, they will often adjust their number to encourage action on the other side, thereby mitigating some of their risk. By waiting until public money has artificially inflated the line, contrarian bettors can capitalize on public perception and find additional line value.

The table below examines the results from betting against the public using our money percentages from the 2016 college football regular season.

As you can see from the table above, there have been 288 games this season in which one team was receiving at least 70% of spread dollars and their opponent was receiving no more than 30% of spread dollars. By comparing Pinnacle’s opening line with their closing line, you can clearly see that public money leads to artificially inflated lines. In these games, the line moved against the money on 77 occasions, moved with the money on 173 occasions and remained unchanged on 38 occasions. 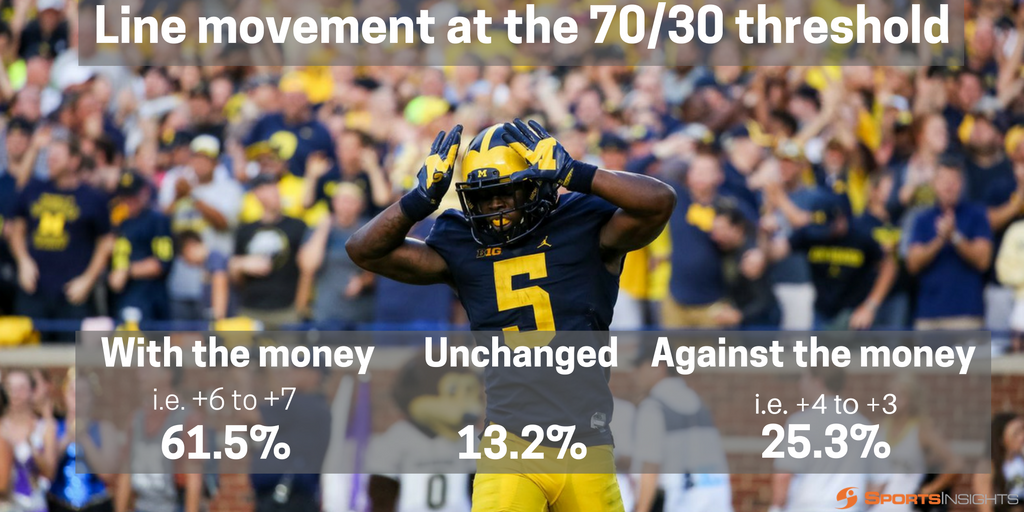 For anybody unfamiliar with betting against the public, it’s crucial to understand that the value is directly correlated with the number of bets placed on each game. Contrary to popular belief, oddsmakers aren’t aiming for perfectly balanced books. Instead, they are looking to avoid major liabilities and exploit the predictable tendencies of casual football bettors. That’s particularly true in college football where there are dozens of games each weekend and the number of bets fluctuates tremendously based on the matchup.

“Both sharp and square betting have an impact on the adjustments,” according to Scott Cooley, an Odds Consultant for Bookmaker.eu. “Early in the week, sharp money is generally the reason you will see a line move. But we will adjust based on overwhelming public support as the week draws on because the liability can become too great.”

Cooley went on to state that sportsbooks are far more likely to shade their lines in heavily bet games. “We are more likely to shade spreads in games involving a high-profile, public team,” stated Cooley. “Obviously, if it’s a marquee matchup with two of those teams, there usually isn’t a need to shade. But for a matchup like Boston College/Florida State, we anticipate the majority of the public action on the Seminoles so we might shade that side of the spread.”

In other words, even the sharpest offshore sportsbooks will adjust their opening lines if they anticipate one-sided public money — usually on the favorite. If there’s no buyback from sharp bettors, oddsmakers will continue to move the line to encourage action on the underdog. These artificially inflated lines have historically created value for opportunistic contrarian bettors since they’re getting a better line purely based on the opinion of recreational bettors. Often known as “squares” or “weekend warriors,” these casual bettors follow their intuition rather than data and analysis.

Sportsbook Insider customers are able to view the number of bets placed at two of our seven contributing sportsbooks, which helps indicate which games are receiving the most action. Using this data, I looked at how every game compared to the daily average and filtered out any game with minimal public support.

The table below displays the results from betting against the public when that game received more than the daily average. That means if there are 20 games on a given day and we tracked a total of 200,000 bets, we would only include games with more than 10,000 bets on it.

Fading the public has been incredibly profitable for college football bettors this season, but it’s important to point out that we’re dealing with a small sample size. That said, these early results are very encouraging and this strategy has been profitable for underdogs and favorites alike:

As I explained in an earlier article, the average bowl game receives more than three-to-four times the bets of an average regular season game. If we focus solely on BCS Bowls and College Football Playoff games, the number of bets is about five-to-six times the average regular season game. With these increased handles, sportsbooks are far more likely to shade their lines based on public money. That’s one reason that betting against the public has historically been so profitable during bowl season.

Using our money percentages, I found that employing a contrarian strategy has been highly profitable in the 16 bowl games that have been played this season. My research found that teams receiving less than half the money have gone 11-5 ATS (68.8%) and teams receiving less than one-third of the money have gone 3-0 ATS. Although this is an incredibly small sample size, it validates past research based on ticket percentages.

Interested in checking out our new money percentages and line charts for every college football game? Sign up now for a 4-day trial of Sportsbook Insider Pro.