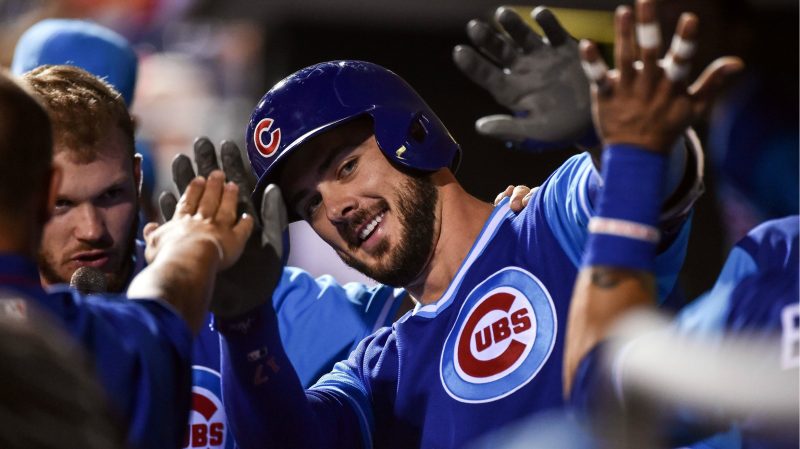 The new year is just 10 days old, but we’ve already begun the MLB prop season. From a personal standpoint, I was psyched out of my mind when I saw this posted. Not to brag, but I have an extensive two-year track record of success at this prop. Basically a home run idiot savant.

Back in my Sports Insights rookie season, I picked Mark Trumbo at 50/1 to lead the league in homers. Last season, I picked Aaron Judge at 80/1, but my arch-nemesis Giancarlo Stanton decided to go for 59 jacks just to spite me and ruin my one-year streak.

He woulda gotten away with it too if it wasn’t for that meddling Stanton pic.twitter.com/CtSWhrRkHL

It’s time to redeem myself. Westgate has an even 100 players with odds posted, from Stanton and Judge to Matt Chapman and Paul DeJong. As Judge proved last year, you don’t have to have an extensive track record of slugging dongs to put up a monster season.

Giancarlo Stanton +500: Now in the Bronx, the artist formerly known as Mike Stanton will be in the heart of modern-day Murderer’s Row. Coming off what was easily the best season of his career with 59 homers, Stanton will have to deal with a couple of factors that could limit his dinger count. First, he’s changing leagues, which generally gives players a bit of trouble for whatever reason. Second, he’ll be pitched differently surrounded by Judge and Gary Sanchez, among others, in the lineup. Third, he’ll have to live up to big expectations in a big market—something that was never in play while in Miami.

Aaron Judge +800: All rise! The reigning King of New York is playing second fiddle to his newest teammate, but he’s the only other man in the league with shorter than 10/1 odds. He’ll likely have a sophomore slump to some degree, but we saw how he could make adjustments after having a great month of September following an awful July and August. Too bad he’s 8/1 this year and not 80/1 again.

Bryce Harper +1500: The future $500 millionaire will be trying to go out with a bang in what is likely his final season in Washington. Maybe he’ll do so by mashing 50 dongs, maybe he’ll do so by making it farther than the NLDS. Who knows? Harper swatted 42 round-trippers in his MVP season in 2015, but has never hit 30 in any other season, though he surely would have if he hadn’t gotten hurt last year. Harper is a tremendous hitter with one of the best eyes in the league, but I’m surprised he has the third highest odds.

Here’s what I’m going to do. I’ll give you a couple fairly safe plays and one riskier one. I was trying to make a case for someone at 100/1 or longer, but there just wasn’t anything good enough there. You’d be a fool not to max bet all three of these, as they’ll likely finish in a three-way tie for most home runs.

Joey Gallo +2500: This guy is essentially the poor man’s Aaron Judge. A true three-outcome slugger to say the least, Gallo finished his first full season with 41 homers, 75 walks, and 196 strikeouts. Per Statcast, his 94 MPH average exit velocity was only worse than Judge’s, while his 23 degree average launch is far superior to any of the other top sluggers. If Gallo can just make contact more, and that’s a big if, it will certainly equate to plenty of dongs. I’m willing to take that chance at 25/1.

Kris Bryant +2500: Last season, Bryant had moved from 20/1 to 8/1 at Westgate to win the home run crown before the season had started. Alas, it was all for not, as Bryant’s “down season” had him finish with a disappointing 29 jacks. This can be explained by a few things: career lows in fly ball percentage and pull percentage, a career high in ground ball percentage, and nearly a 3% lower home run/fly ball ratio than in his MVP season. With many of these statistics likely to normalize, you can expect Bryant to better his home run total next season…hopefully by a lot.

Rhys Hoskins +5000: Hoskins did for the Phillies what Judge did for the Yankees, just in a smaller sample size…and the games didn’t matter, either. In just 50 games, Hoskins put his name on the map by hitting 18 home runs. I don’t think he’ll be hitting 60 home runs next season, but by playing at Citizens Bank Park, he has an edge over most of the field. Though Coors Field is the park everyone thinks of when it comes to home runs, Citizens Bank ranked 1st on park factors‘ home run category last year and has regularly been in the top 10. Reese’s Pieces provides some solid value at 50/1.