What Team Will Jimmy Garoppolo Play for in 2017? 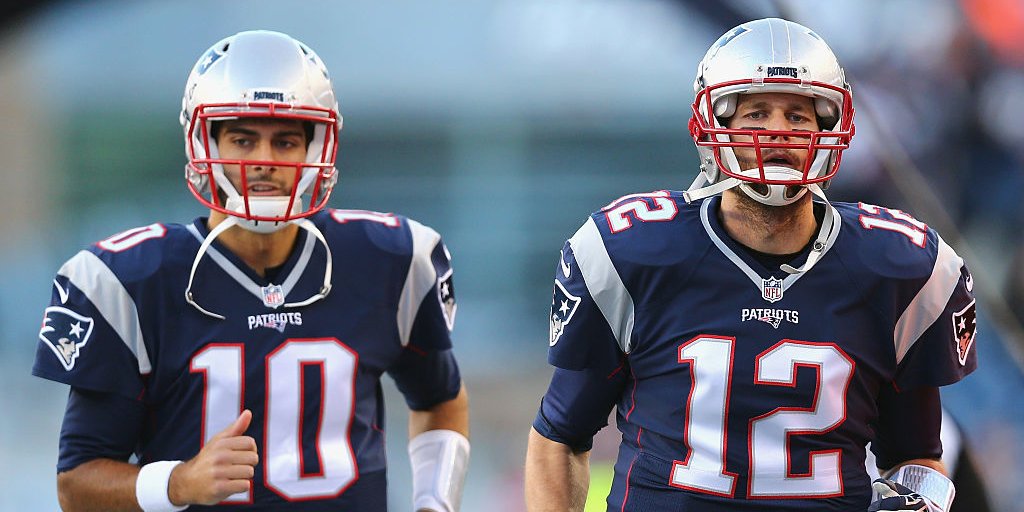 What Team Will Jimmy Garoppolo Play for in 2017?

In NFL
By Andrew Fine

The newly crowned Super Bowl champions will have to make some tough decisions in the offseason. Several starters, including LeGarrette Blount, Dont’a Hightower, and Malcolm Butler, will enter free agency. It’ll be a balancing act for the New England Patriots, which has not shied away from parting ways with players seeking deals the team believes are not justified by their on-field performance. One of the most intriguing offseason storylines is what the team will do with backup quarterback Jimmy Garoppolo, a free agent in 2018.

The 25-year-old from Eastern Illinois started the first two games of the regular season, which coincidentally were the first two starts of his career. In those appearances, he threw four touchdowns and zero interceptions, while completing an unsustainable 72.9% of his passes. With two other quarterbacks on the roster, one of which is Super Bowl 51 MVP Tom Brady, and Garoppolo’s trade value never higher, it’s not surprising to see the third-year quarterback in several trade talks.

In response to these rumors, Bookmaker recently posted odds on what team Garoppolo will play for next season.

Below are the odds as they appear at Bookmaker.

According to CBS’s Jason La Canfora, the Chicago Bears are among Jimmy G’s suitors. The Bears’ interest in Garoppolo is especially noteworthy considering he was not even listed as a potential option back in December. Despite Chicago’s interest in acquiring New England’s young QB, the Bears (+150) are not the favorite. The field is actually listed as the favorite at -125.

Among the other listed landing spots, I believe Houston could be a dark horse in the Garoppolo sweepstakes. Year one of Brock Osweiler’s four-year $72-million contract hardly went the way the Texans hoped it would go. Sure, the Texans made the playoffs for the second consecutive season, but Osweiler was inconsistent and struggled with interceptions. However, it’s unlikely that the team parts ways with Brockstar so soon.

If Houston is interested in trading for another QB, they have close ties to New England—coaches Bill O’Brien, Romeo Crennel, Mike Vrabel, and Larry Izzo are among the notable ex-Patriots—and have traded with them recently. The Patriots dealt Ryan Mallett to the Texans in 2014, however Mallett did not make it through his second season. The Pats could do the Texans a solid and trade them a much more talented quarterback this time around.