Updated MVP and Rookie of the Year Odds: Kamara a Huge OROY Favorite After Big Game 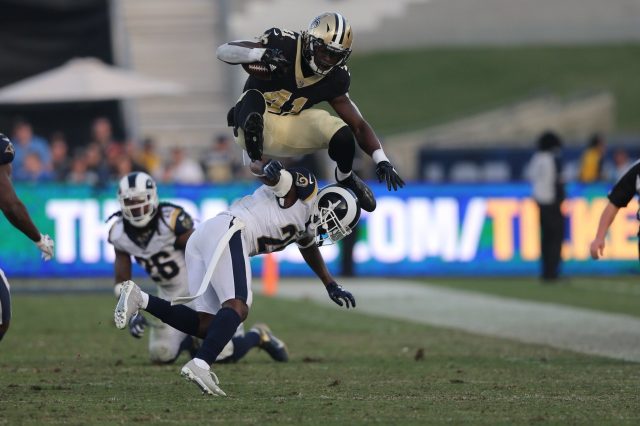 Updated MVP and Rookie of the Year Odds: Kamara a Huge OROY Favorite After Big Game

As each week goes by, another name seems to fall out of the MVP running. Last week, we were down to just three names with shorter than 10/1 odds. Now, there are two. I bet you can guess who they are.

Both MVP favorites cruised to easy victories this past week against much weaker opponents. Tom Brady threw four touchdowns and (gasp) one interception against the Dolphins in a 35-17 win. Carson Wentz had three touchdowns and no picks in a 31-3 laugher against the Bears. Oddly enough, they both threw for 227 yards.

With the Saints’ falling to LA, Drew Brees’ odds have taken a hit, but his stats are certainly still good enough for him to linger around if Brady or Wentz has a bad day.

On the season, Brady’s 111.7 passer rating is tops in the league, with Wentz’s 104.0 slightly behind Brees and Alex Smith for fourth best. Speaking of Smith…

Remember when he was legitimately in the MVP running? At least on paper, that is. That was funny. If you’ve been reading these on a weekly basis, you may remember this quote from a few weeks back regarding Smith.

“He still hasn’t really collapsed and has great numbers, but his odds will continue to slip down the stretch. Trust me.”

How about this Alvin Kamara kid? The Saints had themselves one hell of a draft with him and Marshon Lattimore. If Lattimore doesn’t miss much time, they could have both the offensive and defensive rookies of the year.

Though the Saints’ winning streak ended yesterday, Kamara put up another monster game with 87 rushing yards, 101 receiving yards, and two scores. His nine total touchdowns this season are tied for second in the NFL, only behind Todd Gurley’s 11. I’m going to guess that Sports Illustrated may want to reconsider their “C” draft pick grade for Kamara.

Meanwhile, the sure bet a few weeks ago continues to suck. Kareem Hunt had the hardware in hand when DeShaun Watson tore his ACL, but he and the Chiefs just haven’t been able to hack it recently. Hunt has failed to score a touchdown in eight straight contests and hasn’t rushed for 100 yards in six straight. He’s coming off the worst game of his young career, posting just 17 rushing yards on 11 carries and nine receiving yards on one catch.

Is this going to be a two-horse MVP race the rest of the way? Can Lenny Fournette make a push for OROY or does Kamara have it locked down?

Find out in next week’s award breakdown as we inch closer to week 17.