Despite being an undefeated 7-0 to start the season, the Miami Hurricanes find themselves as home underdogs this weekend against Virginia Tech. The lookahead line over the summer was Miami -6, and on Sunday night BetOnline opened Miami -3.5. However, early bettors were all over Virginia Tech, moving the line a full touchdown to Virginia Tech -3.5. Since then, the Hokies have come down to -2.5. This game is getting more betting tickets than any other on the slate this week, and public bettors are continuing to pound the Hokies.

At the time of publication, only 25% of spread tickets are on Miami, and only 5% of the spread money is on Miami. We did see sharps come in quickly when the ‘Canes reached +3.5, which highlights how smart money can be on both sides of a game depending on the number. I’d be surprised if this game gets above Miami +3 again, but it’s possible.

A win by Miami almost surely locks up the ACC Coastal Division. Here’s a look at the current standings in the ACC: 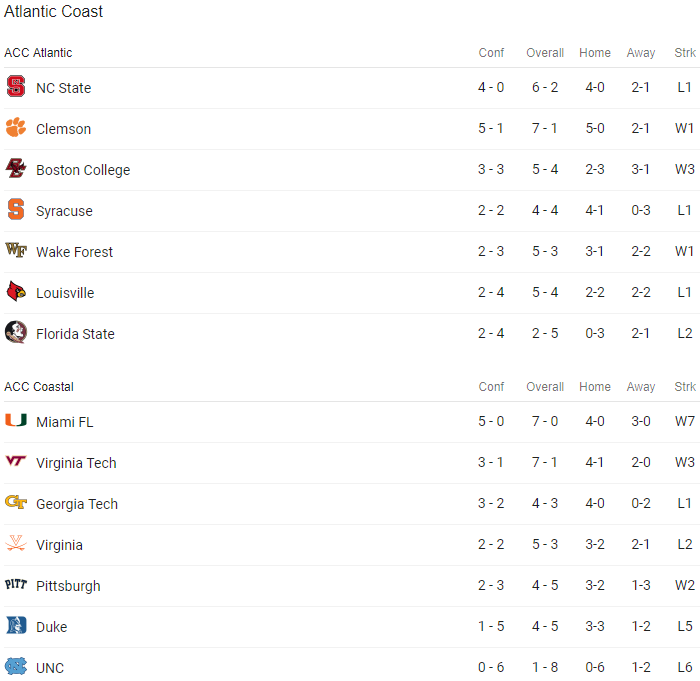 Unfortunately the Hurricanes lost star RB Mark Walton a few weeks ago due to an ankle injury, or else they’d still be favorites against Virginia Tech.

Miami is 3-4 ATS this season while Virginia Tech is 5-3 ATS.

Miami has received <50% of bets in 4 of 8 games so far, compared to just once all of last season.

There is a great historical trend leaning toward the Hokies– via our friends at Bet Labs, the lesser ranked team favored on the road in Top-25 matchups has gone 18-7-2 ATS since 2005. However, fading the public in these highly-bet games is more significant, and the early Twitter consensus is that Va Tech is a lock to cover this week. Tread lightly and think about going contrarian now that the Hurricanes are underdogs.