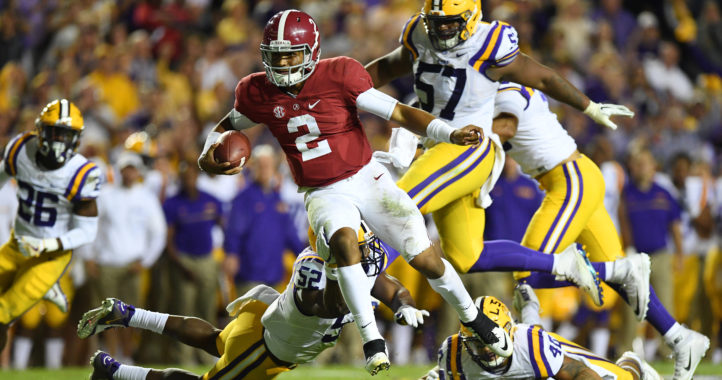 We’re heading into the last few weeks of the 2017-18 College Football regular season with Alabama still firmly atop the National Championship odds at -140. You can get the entire field (any other team in the nation) at +120 to win it all.

Alabama hosts LSU this weekend and while the summer lookahead line listed Bama -12, that line is now -21.5. Below we’ve compared the current and opening Week 10 odds to the lookahead lines over the summer:

LSU at Alabama: The Tide opened -21.5 vs LSU but they haven’t been great against ranked SEC West teams (18-18 ATS since 2005 compared to 19-6 ATS vs. all other ranked teams). Both teams are coming off a Bye week and should be fresh, and we’ve seen spread bets fairly split so far on both sides.

Virginia Tech at Miami FL: The Hurricanes actually opened -3 at BetOnline but sharp money was all over Va Tech early. The rest of the market opened VT as favorites, and now have them listed at -2.5. Miami has had a great season at 7-0 SU but they’re getting just 33% of early public support. I’d be surprised if this line closes Miami +3 or higher.

Clemson at NC State: 90% of early tickets have come in on Clemson to cover on the road, and most of the market appears comfortable keeping the number at -7 right now. We may see some sharp money during the week on NC State if they reach +7.5/+8.

The Army/Air Force total will likely be on the move quickly when it opens– Unders have gone 28-8 when service academies meet since 2005.

FSU is getting just 22% of spread tickets against Syracuse, so bettors realllllllly don’t want to bet on the ‘Noles this weekend.