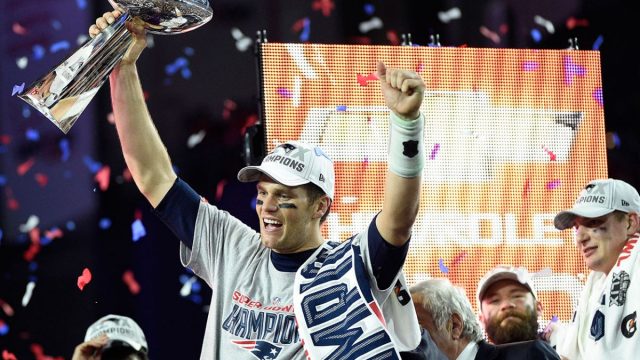 Before the 2017 NFL Playoffs kicked off, Irish bookmaker Paddy Power released odds for the Super Bowl 51 MVP with Patriots quarterback Tom Brady (+230) listed as the early favorite. Considering the Patriots were listed as the +180 favorite to win the Super Bowl, it wasn’t particularly surprising to see Brady listed as the front-runner. However, this was noteworthy since these odds are actually shorter than Brady’s odds of winning the regular season MVP.

Following the Wild Card Round, Paddy Power updated their Super Bowl MVP odds with Brady (+225) still listed as the favorite. Interestingly, Matt Ryan’s odds improved from 12/1 to 10/1 even though the Falcons had a first round bye. After the Divisional Round, Brady moved from +225 to +180 while Ryan jumped from +1000 to +350.

Shortly after the conclusion of the Divisional Round, 5Dimes posted their own Super Bowl 51 MVP odds with several major discrepancies. Most notably, Paddy Power didn’t list any defensive players whereas 5Dimes offered both Patriots cornerback Malcolm Butler (150/1) and Packers linebacker Clay Matthews (250/1).

The following day, the market-setting Bookmaker.eu also posted odds for the Super Bowl 51 MVP. This is a much sharper sportsbook, and they take slightly higher limits on these types of props. Brady and Ryan remained the favorites, but there were more favorable odds for many longshot candidates.

The table below compares the current Super Bowl 51 MVP odds at 5Dimes, Bookmaker, and Paddy Power. It will be consistently updated as the big game approaches.

Editors note: The following section was published on January 16th

Brady has already won three Super Bowl MVP Awards, but I think one of his teammates is actually offering more value. This season LeGarrette Blount ranked eighth in the league with 1,161 rushing yards and his 18 rushing touchdowns were the most in football. New England is the odds-on favorite to represent the AFC in Super Bowl 51, and they’ll likely be a small favorite regardless of their opponent. Brady will be the trendy pick for Super Bowl MVP, but Blount is a more interesting option at 35/1. Interestingly, 5Dimes doesn’t currently have odds listed for Blount.

Make sure to track the latest odds and public betting trends by visiting our free NFL odds page. Interested in following our winning picks? Sign up for a 4-day trial of our Pro subscription for just $49!

Which of these players do you believe are offering value? Can anybody stop Tom Brady and the Patriots? Please leave your thoughts in the comment section below.