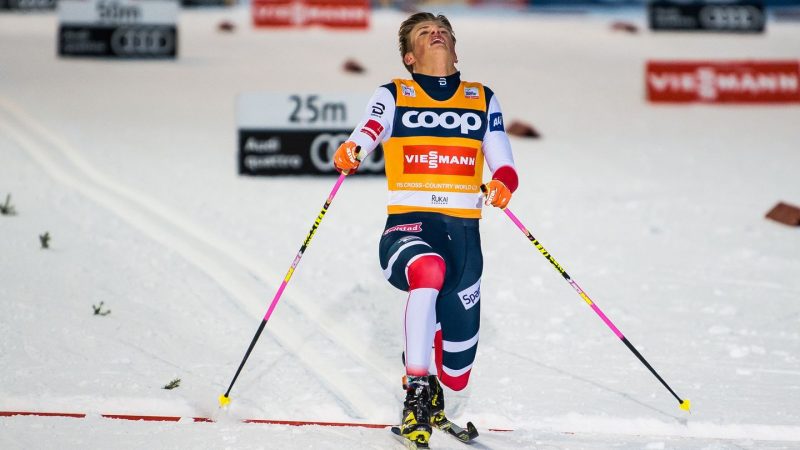 In Entertainment, Olympics
By Mark Gallant

You already know my feelings about the biathlon. I freaking love it. This is similar, but unfortunately, the skiers do not bear arms, as is the case with most skiers.

The skiathlon is a 30 kilometer race made up of two 15 km parts. Classical cross-country skiing and freestyle cross-country skiing. The former entails moving your legs in a straight back and forth motion, while the latter entails the violent lateral motion many of you may be familiar with if you’ve ever skied before. Basically, the really awful part of skiing when you’re on a flat piece of land, but instead of doing it for 100 feet, imagine doing it for 15 kilometers.

And ultimately, the joy.

He’s number one for a reason, folks.

Unfortunately, our boy Adrian Solano will not compete at Pyeongchang. Instead, Johannes Høsflot Klæbo of Norway holds the best odds. The 21-year-old Norseman whose name requires multiple characters that aren’t listed on a standard keyboard has been tearing up the Scandinavian circuit as of late, winning seven different races over the past two months. He has a hell of a chance of heading home with some hardware in his first Olympic Games.

Next up is Sergei Ustyugov, the owner of the 2017 World Championship Skiathlon gold medal. According to his Wikipedia, “He has a girlfriend, cross-country skier Elena Soboleva, with whom he is regularly meeting.” Their kids are going to have some well-built lower bodies.

Third on the list is the man, the myth, the legend: Dario Cologna. Cologna took home three gold medals in Sochi, including the skiathlon. Just this past week, he won the 72 km Tour de Ski. Nearly 45 miles of cross-country skiing, talk about hell. Definitely some value here in taking the chiseled veteran.

Tied with Cologna is Martin Johnsrund Sundby. Sundby’s story is a fascinating one and one that truly hits home. A couple years back, he was suspended for doping because he had too much Ventolin in his system. Ventolin is an asthma medication that I’ve personally used many-a-time. They even took away one of his Tour de Ski titles and a MF-ing World Cup title. I’ll have to lay off the inhaler when they test me at my ski-jumping qualifiers in 2022.

As always, check out the Olympic blog section for the latest and greatest Olympic content.