In Entertainment, Olympics
By Mark Gallant

This sport may very well be in a battle with curling for dumbest best sport in the Winter Olympics. It’s also possibly the only sport that should require a psych eval as a prerequisite.

An athletic contest combining two events. Sounds sensible…maybe combine high jump and long jump, a sprint and long-distance event, or what the hell—why not combine cross country skiing and rifle shooting? I know I’m always jonesing to bring my Barrett .50 cal to the slopes. Unfortunately, there are some pesky newfangled rules that forbid me to shoulder a long arm when I’m pizza french-frying down the mountain. 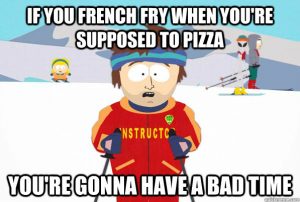 Bovada has posted odds on three separate relay events. That’s right, not only is this an individual event, but a relay, as well. When you pass the rifle off to your teammate, just make sure the safety is on.

Men and women, shooting together in peace and harmony. This will be the second Winter Olympics to include the mixed biathlon relay, though I’m not sure why it hasn’t been going on for centuries. In 2014, Norway, this year’s favorite, defeated the Czech Republic by a mere 32 seconds for the gold. Check out the exhilarating highlights in this non-embedable video. A close second on the odds list is Germany, who was DQ’ed last time. Is it just me, or does Germany always have issues at the Olympics?

On the men’s circuit, the Nordic boys are near odds-on favorites at +110. Last Olympics, they lost to Russia by just 3.5 seconds in an event that takes over an hour to complete! It must have really sucked to have been those guys. Skiing and shooting your whole life just to lose by so little, what a shame.

As for the ladies, we have Germany as an odds-on favorite at -150. They were devastated last Olympics after gunwoman fell and broke a ski pole. The last thing you want to see in the Olympics is someone falling, unless of course that person is competing for a country other than your own. In that case, I’m all for the occasional fall. Don’t try and take the high road and tell me you don’t want to see some falls, either. There are Youtube ski crash compilation videos with millions of views for a reason. As a matter of fact, why don’t you go ahead and take a gander at one.

Check back over the next month for more hard hitting Olympic content as we gear up for Pyeongchang.