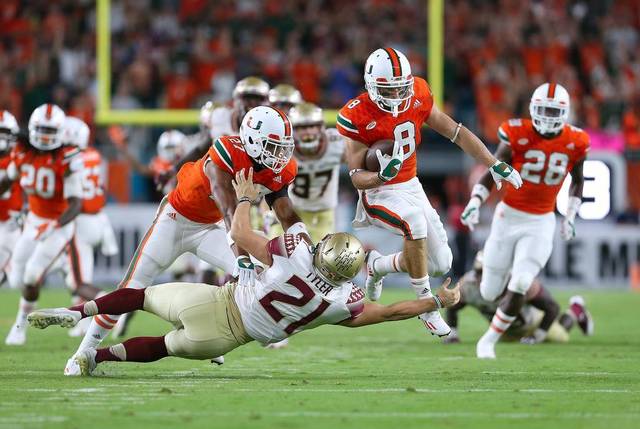 It’s rare for Florida State football to be a home underdog, but it’s even rarer when the public doesn’t want to bet on the Seminoles. FSU has never closed with less than 20% of bets in our database and hasn’t closed with <30% of spread bets in nearly 10 years– the last time it happened was in 2008, a 30-point loss to Florida in which only 24% of bettors took FSU. The only other time it happened was 2007 in a 21-14 win over Alabama when the Seminoles closed with 29% of bets. [betting %’s from our 7 contributing offshore sportsbooks]

At the time of publication, FSU (0-2-1 ATS) was getting just 18% of spread bets against Miami-FL and have moved from a pick ’em to +3. Over the summer the lookahead line pegged the ‘Noles as favorites, but things have changed. FSU lost the opener to Alabama, had their next game cancelled due to actual hurricanes, then lost again at home to NC State before escaping on the road last week against an improved Wake Forest squad. They also lost starting QB Deondre Francois in the ‘Bama game, so this season certainly hasn’t gone as planned.

Miami-FL is 3-0 on the season and coming off a comfortable 31-6 win at Duke, snapping the Blue Devils 4-game SU and ATS streak to start the year. They’re sort of getting healthy although RB Mark Walton is still dealing with some ankle issues, so that’s something else to watch for this game. Miami has also had their schedule re-arranged due to weather, so both teams’ season win totals are voided.

FSU did move to +3.5 at 5Dimes and actually opened +3.5 at Pinnacle, but they now remain at +3 around most of the market. We triggered a few separate steam and reverse-line moves on FSU at +3.5, but that’s the only number sharp bettors are willing to take right now. The graph below shows line movement at BetOnline and public betting trends around the market (via 7 offshore books):

The last time the Seminoles were home dogs was last season vs. Clemson and they covered the 4.5-point spread in a 37-34 loss. Before that though, they hadn’t been home dogs since 2011 in a 23-13 loss to Oklahoma, unable to cover +3.5.

FSU hasn’t lost to Miami-FL since 2009, a run of 7 straight wins. They’ve played three straight years of 1-possession games but the ‘Canes have’t been able to pull one out yet. This is the most bet game on the slate for Saturday and has already attracted nearly 5,000 bets from our contributing books, so lots of eyes will be on this one to see if Miami can break the streak.