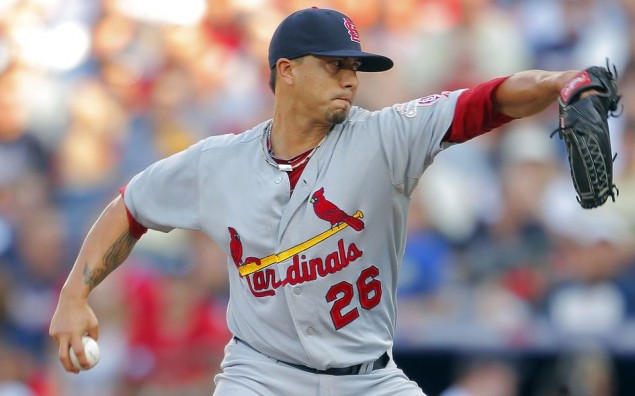 Although a majority of televisions will be tuned into the final presidential debate or Monday Night Football, perhaps the most compelling event on TV tonight is Game 7 of the National League Championship Series. In this decisive game, the past two World Series winners will face off in San Francisco with both teams sending their ace to the mound.

Matt Cain will take the hill for the Giants tonight after turning in a Cy Young-caliber season. The 28-year old right hander posted a 16-5 record with a 2.79 ERA during the regular season and, more importantly, was great for bettors as well. In games started by Cain, the Giants were 21-11 for 4.7 units earned and a 14.7% return on investment.

Despite posting career highs in nearly every statistical category, Lohse wasn’t quite as lucrative for the gambling community this past season. The 34-year old veteran finished with a 16-3 record and a 2.86 ERA, but the team fared poorly when Lohse did not factor in the decision. In 32 starts, the Cards went 20-12 for 2.7 units earned and an 8.4% ROI.

With two stud pitchers on the mound, it’s no surprise to see that most sportsbooks currently have the total listed at 6.5; but who has the advantage in this do or die game?

Since 2003, there have been eight decisive Game Seven’s with the home team being listed as a favorite in all but two instances. The table below, using line data from Pinnacle, shows the results from the most recent deciding games.

As you can see, there has been a slight advantage towards home teams as they have gone 5-3 in Game Seven’s. However, betting on every home team in series determining games would have resulted in a profit of just 1.3 units.

Of course this is a limited sample, but it’s interesting to see how home teams have done in high pressure situations — especially when you see that road dogs have been consistently undervalued in the postseason.

According to our BetLabs software, playoff road dogs have gone 87-113 for 5.16 units earned and a 2.6% ROI. When you focus solely on National League underdogs, those figures improve to 48-55 with 8.46 units earned and an 8.2% ROI. The Cardinals have had past success in pivotal games (3-0, +2.71 units) and road dogs have performed superbly in the postseason, but the edge has belonged to home teams in recent series deciding games.

Currently, 58% of moneyline wagers are on the Giants, but who do you like in tonight’s game? Is there value on either side? Please leave your thoughts in the comments section below.

Below was previously published...

What Is Causing the Line Movement in the Ohio State/Michigan Game?

Although it may not...