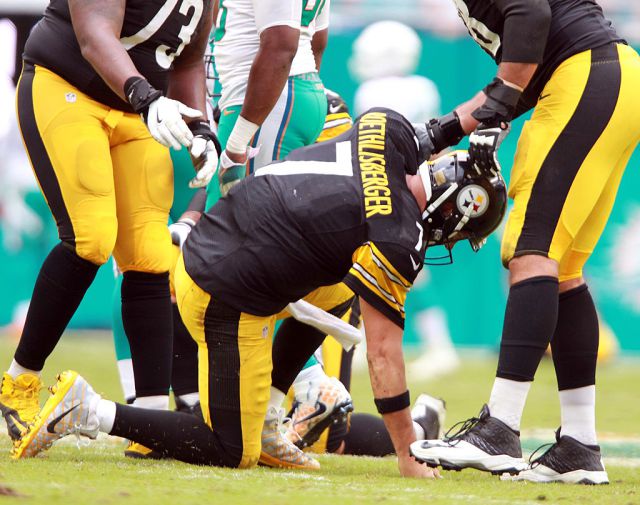 After playing through the pain in Sunday’s loss to the Miami Dolphins, Ben Roethlisberger underwent surgery on Monday to repair a torn meniscus in his left knee. Initial reports indicated Roethlisberger would not play in this weekend’s game against the New England Patriots, but team officials were cautiously optimistic that he could return after the bye week for the Steelers Week 9 matchup against the Baltimore Ravens.

On Wednesday afternoon, ESPN’s Chris Mortensen reported the injury was more serious than originally reported, and Roethlisberger could miss four to six weeks. This came as a huge blow to the Steelers, who will start four-year veteran Landry Jones in Roethlisberger’s absence. In two career starts, Jones has completed 24 of 41 attempts (58.5%) with three touchdowns and two interceptions.

Prior to Roethlisberger’s injury, the Steelers were listed as a pick ’em against the Patriots on the lookahead line at the Westgate Las Vegas Superbook. Following the announcement that Big Ben would likely miss Sunday’s game, most offshore sportsbooks opened the Steelers as 7-point home underdogs. That would seem to indicate that Roethlisberger is worth 7-points to the spread, which falls in line with our previous analysis.

Before the start of the season, we surveyed several prominent oddsmakers from Bookmaker.eu, CG Technology, Westgate Superbook and William Hill. Although there was some debate regarding the elite quarterbacks, there was a consensus that Tom Brady, Aaron Rodgers and Ben Roethlisberger were the most valuable players to the spread. Each of those quarterbacks are worth 6-7 points to the spread, which perfectly correlates with early line movement.

It’s also interesting to note that BetOnline, who is renowned for being the first offshore sportsbooks to post lines, actually opened the Steelers as 2-point underdogs before it was clear that Roethlisberger would miss Sunday’s game. The Steelers quickly moved from +2 to +4 before the game was taken off the board. When the line re-opened on Monday morning, public money on the Patriots caused the line to move from 7 to 7.5 before there was buyback on the Steelers.

With Roethlisberger sidelined and Tom Brady feasting on opposing defenses, bettors have been avoiding Pittsburgh at all costs. At the time of publication, the Steelers were receiving just 12% of spread tickets and 4% of total dollars wagered. Although those percentages will likely increase as the week progresses, it’s worth noting that we have never tracked less than 23% of spread bets on the Steelers.

This isn’t the first time Pittsburgh has played without their star quarterback, as durability has consistently been a concern with Roethlisberger. In fact, Big Ben has missed at least one regular season game in eight of his twelve professional seasons.

Since Big Ben took over as the starting quarterback in Week 3 of the 2004 season, the Steelers have gone 112-95 ATS (54.1%) with +14.89 units earned. However, it’s interesting to note that Roethlisberger’s backups have been surprisingly productive given the opportunity. While Roethlisberger has covered the spread at the breakeven point (52.4%), his backups have been quite profitable.

Dennis Dixon, Charlie Batch, Michael Vick, Byron Leftwich, Tommy Maddox, and Landry Jones have each started at least one game for the Steelers since the team installed Roethlisberger as their starting quarterback. This hodgepodge of castoffs, veteran journeymen and career backups combined to go 14-6 ATS including an 8-1 ATS record as underdogs.

Despite Roethlisberger’s injury, sportsbooks haven’t made any major changes to the Steelers futures. At the time of publication, Pittsburgh was -185 to win the AFC North, +475 to win the AFC Championship and +1200 to win the Super Bowl at 5Dimes. In the past, Roethlisberger has played through injuries and defied projected timetables, and it looks like oddsmakers believe that could happen again.

Sunday’s game against the Patriots is currently the most heavily bet Week 7 game, so it will be interesting to see whether public money on the Patriots eventually causes the Steelers to move from +7 to +7.5. For the latest odds, betting trends, injury updates and more, bettors can check out our free NFL odds page.