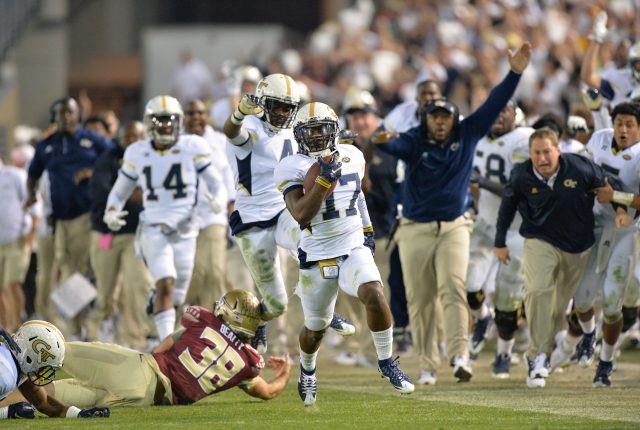 If you have any experience with sports betting, you already know that the Associated Press (AP) rankings are not the most accurate evaluation of a team’s talent. Announcers will constantly use the term “upset” when an unranked team defeats a ranked opponent, even if the unranked team closed as the favorite. That’s particularly true in early season games where writers haven’t had the opportunity to study game film. In fact, there has also been ample analysis showing that the preseason AP poll has minimal ability to predict the final AP poll.

Although the AP Poll is highly flawed, public bettors continue to place an inordinate amount of value on these rankings. According to my research, there have been more nearly 2,400 games between ranked and unranked teams since the start of the 2005 season. Over this large sample, the unranked team has received a majority of spread bets at our contributing sportsbooks less than 8% of the time (186 of 2375).

Oddsmakers understand public betting tendencies and shade their opening line to capitalize on public perception. By going against the grain and taking every unranked team against the spread, bettors would have gone 1212-1163 ATS (51.0%) over the past eleven seasons. That’s not enough to overcome the standard -110 juice charged by sportsbooks, but it does show a slight edge.

It’s also important to realize two important things about oddsmakers: One, they are constantly adapting to recent trends. Two, in recent years their lines have become increasingly influenced by sharp money as opposed to public money. Although unranked teams have done well against ranked opponents, that advantage has clearly been decreasing over the past few seasons.

Early season AP rankings are particularly flawed since there have been very few games played and most of the games have been played against cupcake competition. The AP poll isn’t an accurate indicator of talent, but bettors still overwhelmingly pound these ranked teams. As you can see, unranked teams have been particularly profitable in early season games.

As the season progresses, the AP rankings become increasingly accurate and the value of fading top ranked teams starts to wane. In order to capitalize on the public’s tendency to overvalue ranked teams, bettors need to focus on games played during the first month of the season. That’s particularly crucial since unranked teams have continued to be profitable in early season games despite the declining value of unranked teams overall.

I would not recommend betting against every single ranked team, but it’s clear that ranked teams routinely have artificially inflated lines based on public perception. This edge is magnified in early season games where both oddsmakers and AP voters have limited data to analyze.

Sportsbooks no longer emphasize the importance of balanced books and they are willing to open themselves up to liability if they believe they are on the right side of the number. That said, books are far more likely to shade the line for a college football game than they are for an NFL game. That’s particularly true in games featuring a ranked team.  “We are more likely to shade spreads in games involving a high-profile, public team,” said Scott Cooley, an Odds Consultant for Bookmaker.eu.

As I explained earlier this summer, the number of bets placed on each game heavily impacts the value of betting against the public. There are so many college football games every week and books want to find ways to minimize risk. To that end, it’s common for oddsmakers to adjust the line if there’s too much liability on one side of a marquee matchup.

Since we already knew that a majority of public bettors routinely take ranked teams against ranked opposition, I believed that we could exploit this tendency by focusing on heavily bet games where shading would be more prevalent. Although there’s significant action on most games involving at least one ranked team, that’s not always the case. Bettors won’t turn out in droves to bet massive mismatches like Florida State/Tennessee-Chattanooga or LSU/Eastern Michigan. In those games, sportsbooks won’t receive enough money to warrant shading the line.

The table below displays how unranked teams have fared against ranked opponents based on the number of bets compared to the daily average. That means if there are 50 games on a Saturday and we tracked 500,000 total bets, the daily average would be 10,000 bets.

As we look at increasingly heavily bet games, the winning percentage and return on investment (ROI) for unranked teams skyrockets. The sweet spot for taking these unranked teams comes in games receiving at least 2.5X more bets than the daily average. Since 2005, teams fitting those criteria have gone 77-53 ATS (59.2%) with 20 units won. That will usually include two prominent programs like Stanford/USC, Notre Dame/Texas or Michigan/Ohio State.

When unranked teams face off against Top-25 opponents the strategy is clear, but what happens when two ranked teams do battle? Those marquee matchups receive tons of action and often rival the handle taken on NFL games. Interestingly, the behavior of the betting public shifts dramatically. Since 2005, a majority of public bettors have taken the favorite in 82.8% of all regular season games. However, when two ranked teams face off the favorite has received a majority of public bets in just 61.9% of all regular season games.

Bettors seem to believe that ranked teams are evenly matched, so they are increasingly willing to take the points and simply hope for a competitive game. This has proven to be a very ineffective strategy. Over the past eleven seasons, the favorite has gone 263-220 ATS (54.5%) when two ranked teams face off. In late season games where the rankings are more accurate, that win rate increases substantially.

The number of bets statistic is proprietary Sports Insights information that is available exclusively to Sportsbook Insider subscribers along with real-time odds, public betting trends, money percentages, e-mail alerts, and much more. Sign up for a 4-day Pro trial, schedule a one-on-one demo, and we’ll tack on an additional four days for free!