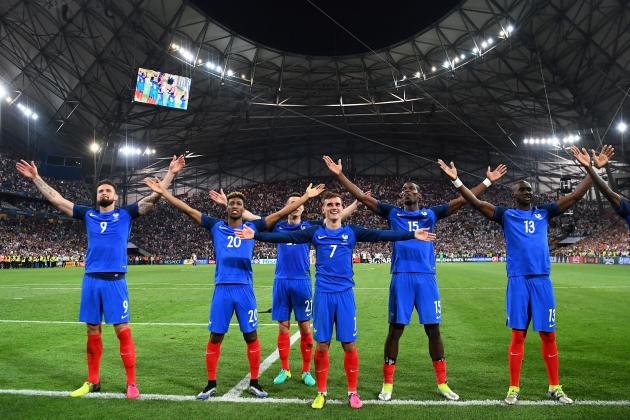 Host country and pre-tournament co-favorites France have earned a spot in the Euro 2016 Finals, where they’ll play Portugal on Sunday, July 10th.

Portugal had drawn 5 straight games before beating Wales in the semifinals. France have now won 5 of 6 games while only drawing against Switzerland. Clearly France has the better overall team and are fairly big favorites to win the title now. Here’s a look at how each team’s odds have fluctuated since opening back in July of 2014. France was as high as +500 while Portugal was as high as +2350:

Germany was getting more than half the money wagered to win it all at William Hill prior to their semifinal loss to France, so that was a result they welcomed. For the Final, here were the 3-way moneyline opening odds from Pinnacle:

Below is a screenshot from our Pro Live Odds page, showing opening and current odds as well as market betting percentages (free members can view odds here: sportsinsights.com/euro):

As a reminder, the 3-way moneyline is based on 90 minutes only, so it does not include extra time or a shootout. As of Sunday morning, France are getting nearly 70% of moneyline tickets around the market but have dropped from -110 to -102 at CRIS, and +103 to +113 at Pinnacle. Portugal are also getting a high % of moneyline bets considering they opened nearly 4:1 to win in regulation, and their odds have moved from +380 to +348 at CRIS and +377 to +337 at Pinnacle. This would indicate that sportsbooks are taking some bigger bets on Portugal to win in regulation to move the line, but the real value may be on the draw. Just 6% of bettors think the final will go into extra time, but the draw line has moved from +217 to +211 at Pinnacle, meaning there’s sharp money on the draw. [easy-tweet tweet=”At around +215 odds, the draw looks to be the play in the Euro 2016 Final.” via=”no” usehashtags=”no”]

Portugal may be getting their best defender Pepe back, who missed out last game due to injury. France are healthy and their biggest issue is finding the right lineup to start with. They have plenty of options and depth off the bench, which gives them a huge edge if this game does reach extra time or a shootout. With a future on France at +300 odds, there’s only a small temptation to simply hedge on Portugal at +180 but still feel like the real value here is on the draw, with France to win in either extra time or penalty kicks.

Up until the semifinals, moneyline favorites had not performed well at Euro 2016. However, France and Portugal both took care of business in the semis as moneyline favorites to improve those results. Overall, draws have nearly broken even while moneyline underdogs have cashed in considerably:

Lastly, France’s Antoine Griezmann is now nearly a lock to be top goalscorer at the tournament, and he’s currently listed at -30000 ($30,000 to make $100). Prior to the tourney, he was listed at +850 behind only Thomas Muller and Cristiano Ronaldo.

If you’re holding a ticket on France to win it all, are you letting it ride or locking in a sure profit? If you happened to bet Portugal to win it, are you hedging on France? Feel free to leave your comments below.