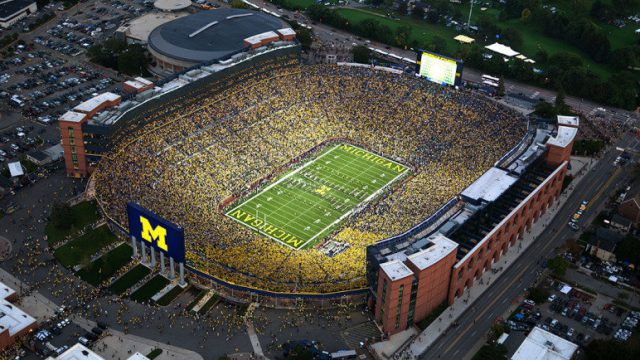 Many factors are taken into consideration when handicapping a game, but home-field advantage is one of the most common considerations. There has been a general consensus that home-field advantage is worth around three points to the spread, although the number varies based on venue. That’s particularly true in college football where schools like Michigan play in massive stadiums while smaller schools like Bowling Green essentially play in a tiny shoebox.

For a quick example of how home-field advantage can theoretically affect the point spread, let’s examine a matchup between two evenly matched teams. If neither team should be favored on a neutral field, the home team would likely be favored by three points. If Team A would be 3-point favorites at home and 3-point underdogs on the road, then the change of venue is essentially worth six points.

Past research has found that home-field advantage is vastly overvalued by NFL bettors, so I wanted to confirm Cooley’s statement and determine whether the same was true for college football bettors. My analysis found that home teams have gone 4,412-3,044 (59.2%) straight up since the start of the 2005 season. Additional research found that in these games, the average margin of victory was 5.01 points.

Bettors may think that because the average margin of victory exceeds the supposed point spread value of home-field advantage, it would be a wise decision to back home teams. They would be wrong. Since 2005, road teams have actually gone 4,039-3,885 ATS (51.0%) including a 415-375 ATS record (52.5%) last season.

There’s also a large segment of the betting population that believes that home-field advantage is enhanced in conference rivalries since the excitement of playing a familiar rival leads to louder, more raucous crowds. Once again, those bettors are incorrect. According to my analysis, road teams have actually gone 2,639-2,455 ATS (51.8%) in conference games.

Many intelligent sports betting analysts have pointed that it is flawed to view home-field advantage as a flat value, instead arguing that it should be viewed as a modifier based on tempo. In simpler terms, the home team has a slight edge on every play but that advantage is magnified based on the number of plays that are run. In a methodical, low-scoring game, home teams would not fully realize their advantage. To test this theory, I decided to examine how the closing total affected the performance of road teams in regular season games.

As you can see, the ATS winning percentage and return on investment (ROI) for college football road teams steadily increases as we gradually lower the closing total. In conference rivalries, the winning percentages increase at every listed data point.

It was also interesting to see how the closing total affected home-field advantage in terms of straight up win-loss records. Although home teams have won 59.2% of their games by an average margin of roughly five points, those numbers shrink dramatically in games with low totals. When the closing total is 48 or lower, home teams have won at a 57.1% rate by an average margin of 3.25 points.

Another key revelation was that home-field advantage was particularly overvalued in marquee conference matchups. As I explained earlier this week, the number of bets has a significant impact on the value of betting against the public. Oddsmakers don’t feel compelled to adjust their lines to account for public perception unless they expect massive liabilities, therefore opening lines are frequently shaded for major conference games but not for small conference games.

Since casual bettors have historically gravitated towards home teams, there has been even more value taking visitors in heavily bet games. When a game is receiving more bets than the daily average, the visitor has gone 1452-1378 ATS (51.3%) overall and 1025-933 ATS (52.3%) against conference opponents. When the closing total is 48 or lower, the ROI skyrockets from 2.2% to 12.5%.

Clearly home-field advantage has been vastly overvalued, which has created contrarian value on visitors. That edge has been amplified in rivalry games — especially when it involves two teams from Power Five conferences. For example, visitors have covered the spread in 57.4% of all low-scoring Big Ten and SEC games.

It’s also worth pointing out that just because teams usually win at home, doesn’t necessarily mean that they cover. Since 2005, the Michigan Wolverines have gone 53-23 SU (69.7%) but only 35-41 ATS (46.1%). Oddsmakers account for home-field advantage when setting lines, but many casual bettors don’t seem to realize that.

It’s tough to definitively determine the point spread value of every school’s home-field advantage, but it’s clear that it varies greatly. “A Big Ten stadium packed to the brim is going to command more of a home-field adjustment than a full house at Middle Tennessee State,” confirmed Cooley. “There is even a difference between the high-profile programs of a major conference. For example, USC has more of a home-field edge than Stanford, even though the latter has been a better product on the field for the last half decade or so.”

One exception to this rule is Boise State and their unique “smurf turf.” Although they’re a smaller school, they have incredible crowd support and oddsmakers believe that their home-field advantage is on par with the nation’s biggest programs.