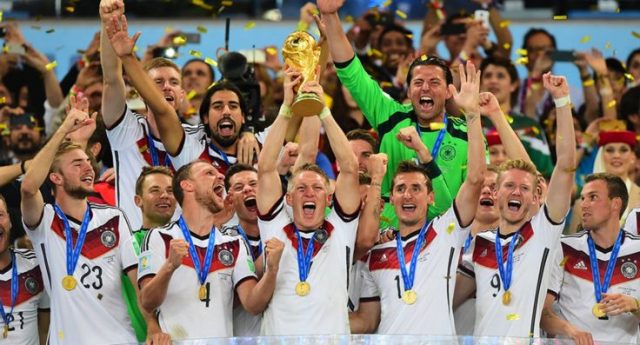 We finally have the 32-team field set for the 2018 Men’s World Cup, which kicks off on June 14, 2018 in Russia. This will be the 21st World Cup tournament and the first World Cup ever held in Eastern Europe. The qualification process began in March 2015 and just wrapped up in November 2017.

Back in 2016, Westgate Las Vegas Superbook posted World Cup odds for 75 countries with defending champions Germany (+450) listed as the early favorites. Currently they’re still the favorites but are now available at +500 at 5Dimes. It’s important to note that all bets are action, so even teams that didn’t end up qualifying for the World Cup were losing bets (sorry, Italy or USA bettors).

It’s a sad time for the USA who won’t be participating in the 2018 World Cup in Russia. They were unfortunately knocked out on the final day of CONCACAF qualification after losing to Trinidad & Tobago, part of a 40/1 moneyline parlay that crushed all hopes and dreams.

In CONMEBOL, it took Argentina until the final day of qualification in order to get into the World Cup, but Messi and company will be there. Chile, who had the 10th-best odds to win it all in Russia, will not be there. 2010 World Cup runners-up Netherlands have also missed out on qualifying and will not be at the 2018 World Cup. Same goes for Italy and Ireland, two countries that have large support in the USA.

Sportsbooks around the market won’t be too thrilled with USA’s omission, or the other big names around the world, as it’ll cost them some handle:

1/ Per @LVSuperBook @golfodds on #USMNT missing World Cup: "Expecting the absence of USA to cause around a 15% drop in handle." @Covers

Now that #USA has been eliminated from the #WorldCup , Germany (+500) has the highest bet count & Belgium (+1200) the biggest exposure.

Although it’s still too far out to make a bet, I’m keeping an eye on a few teams: Argentina, Mexico, Nigeria and Peru. Group odds to win/advance were recently posted and I think there’s value on some underdogs to reach the knockout round.

A couple teams I would absolutely avoid are Russia 40/1 and Sweden 85/1. I don’t think either has any realistic shot of coming close to a World Cup title, and both will likely struggle to even win a game when June rolls around. I’ll continue to update these odds as the World Cup approaches, and we’ll be back with a more in-depth preview once the tournament draws closer.

If you’re curious how odds looked for the 2014 World Cup, we’ve got those here for reference.