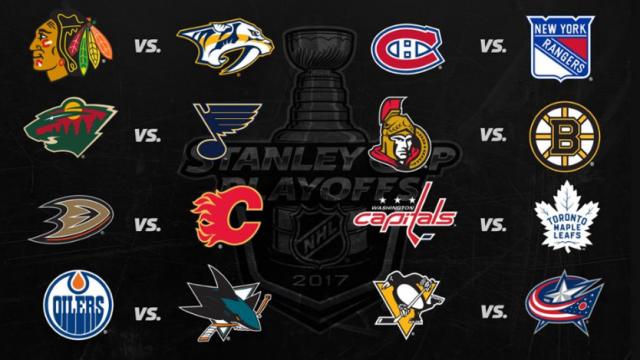 The NHL Stanley Cup Playoffs are here and the table below shows 1st round series odds from BetOnline and 5Dimes. For comparison, you can also take a look at last year’s series odds to see how odds may change game-by-game.

The Bruins got a big 2OT win on Friday night to keep their season alive. Boston is now down 3-2 in the series with a home game on Sunday afternoon.

Washington won a pivotal Game 5 in overtime to take a 3-2 series lead, and is back to big -750 series favorites.

The Predators swept away the Blackhawks on Thursday night to take the series. Pittsburgh also eliminated Columbus. Edmonton, St. Louis and New York Rangers all sealed their series victories on Saturday night.

Below was written on April 21, 2017:
There are no more series odds for Ducks/Flames since Anaheim swept Calgary 4-0.

The Senators got a big Game 4 win to take a commanding 3-1 series lead over Boston. The Bruins are 0-22 all-time in the playoffs when down 3-1 in a series, but Boston is small favorites in Game 5 and will be big favorites in Game 6 at home.

The Wild kept their season alive in Game 4 in St. Louis, and saw their odds improve but still face an uphill battle. We also have three great series’ tied at 2-2: Washington/Toronto, Montreal/NYR, and Edmonton/San Jose.

Below was written on April 16, 2017:
We’ve seen a little of everything so far with the Penguins and Blues both up 3-0, Washington struggling with Toronto, and Nashville going up 2-0 on Chicago. St. Louis is probably the biggest surprise as they went into Game 1 as +160 series underdogs, but are now -1400 favorites with a 3-0 series lead. Nashville and Anaheim have a chance on Monday night to also go up 3-0 in their respective series’.

Below was written on April 14, 2017:
Game 1 results have a big impact on the rest of the series, especially when the road team wins. As you can see, the Bruins moved from -210 to -420 after their big Game 1 win in Ottawa. The Predators, Rangers, Sharks and Blues also got big road victories and are all now favored to advance to the conference semifinals. Nashville was an intriguing pick before the series with less than 20% of tickest at BetDSI to advance. Pittsburgh’s home win in Game 1 improved their odds from -152 to -320 while Washington and Anaheim are also now much bigger series favorites.

Below was written on April 10, 2017:
There are a couple of interesting odds that immediately jump off the board. The only series in which the lower-seeded team is the favorite is Boston/Ottawa. The Bruins are surprisingly large favorites headed into the series considering they are on the road and have been terrible against the Senators over the past couple of seasons. The B’s have gone just 1-5-2 against the Senators over the past two years, including a 2-1 shootout loss last week. The first game opened with Boston as -120 favorites on the road.

The Capitals are by far the biggest favorites in their series against the Maple Leafs. The Leafs couldn’t get the job done on Sunday against Columbus when one point would have landed them Ottawa instead of Washington. Now, they are the biggest dogs in a playoff series at +260.

In the Western Conference, the 1-seed Blackhawks squad are significantly smaller favorites over Nashville than the 1-seed in the Eastern Conference. In fact, they’re even smaller favorites than the Bruins are over Ottawa which could be for a couple of reasons. First, compared to some of their teams in recent years, Chicago is somewhat inexperienced. They still have their franchise duo up front in Toews and Kane, while Keith, Seabrook, Hjalmarsson, and their reunited friend Johnny Oduya hold down the blue line. However, their depth up front could be lacking.

Another reason could be that oddsmakers expect them to tire out. They are playing close to 100 games almost every year because they generally make it pretty deep into the playoffs. The veterans mentioned above have likely played more than an entire season’s worth of playoff games this decade. Despite having a great regular season, they may wear down relatively quickly in the playoffs compared to Nashville.

Additionally, bettors may want to take a look at the conference championship odds and Stanley Cup odds at 5Dimes.

Looking for Stanley Cup darkhorses? We picked out a few contenders offering value before the playoffs began. Be sure to bookmark our free NHL odds page to track the lines for each game.