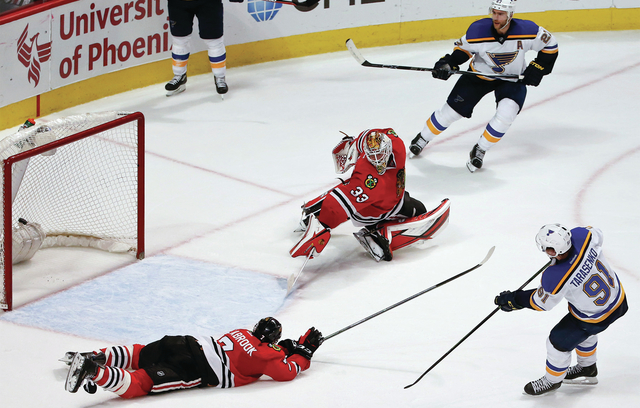 The NHL playoffs are underway and we’ll be tracking how the series prices fluctuate from game to game, starting with Round 1. Below shows the opening series odds and current series odds from 5Dimes sportsbook:

The Blues and Blackhawks will play a Game 7 on Monday night. Chicago came back to win Game 6 and look to have some momentum heading into the final game of the series. Chicago reached +625 to win the series after Game 4 but now it’s essentially a toss-up.

The Ducks will look to close out the Predators Monday night after dropping the first 2 games at home. Anaheim had reached +360 to come back and win the series, but they’re not -450 to close it out.

Uh oh. The Flyers are closing in on another 3-0 series comeback, this time against the Caps. They won Game 5 by a 2-0 score and now find themselves just 2 games away from completing another epic run. They were +4000 to win the series after going down 3-0 but are now just +650.

Another surprise was the Sharks dismantling the Kings in just 5 games. LA was the second most popular pick to win the Stanley Cup at William Hill, and other sportsbooks around the market are likely happy that LA has been knocked out early.

The Blackhawks kept their season alive after beating St. Louis in double-overtime, but still trail 3 games to 2. Chicago is now +270 to advance after they were +625 heading into Game 5.

The Lightning were the first team to clinch a bid into the conference semifinals. They opened -155 to beat Detroit in the series and were never below -300 after that.

The Flyers moved from +4000 to +1400 to win the series following their Game 4 win, but are still obviously big dogs. However, they did come back from a 3-0 series deficit just 6 years ago against the Bruins so anything is possible.

The Sharks and Stars both went up 3 games to 1 in their respective series, and neither has been an underdog since the series started.

On the contrary, the Panthers and Islanders have flip-flopped after every game, and each team has been a series underdog at least twice since it started.

As always it’s been an exciting playoffs and we only have one potential sweep in the first round. The Penguins made the biggest jump with their Game 3 win, moving from -130 to -380 to win the series. This increased their odds to win the series by 23% despite having to turn to two different backup goaltenders to notch their first playoff victories.

Anaheim and Los Angeles both avoided going down 3-0 in their series and will likely be series favorites again if they can win Game 4. It’s an interesting spot for bettors if they like either team in Game 4– both are listed at -110, but both are also listed at +175 to win the series. Bettors could take Anaheim and/or LA at +175 to win the series and also give themselves a chance to hedge going into Game 5.

The Predators got another big road win in Game 2 and improved their probability to advance in the series by more than 20% (from -160 to -450).

The Blues also earned a massive road win in Chicago in Game 3 to take a 2-1 series advantage. It was the first game in over 2 years that the Blackhawks lost a game in regulation after leading after the second period. This moved the Blues’ probability to advance from 46.51% to 68.25%, the biggest single game swing we’ve seen in the NHL Playoffs so far.

The Red Wings got a big home win to narrow their series from 2 games to 1. Detroit’s chances to win the series only improved by about 11% though.

Road wins by the Blackhawks, Predators, Rangers and Sharks in Game 2 improved their chances to advance by a little more than 20%. This was a sharp increase over the average of 14% which we highlighted below, showing there’s slightly more importance on Game 2 than Game 1. We’re definitely interested to see how Game 3 will affect each series price.

The Lightning and Penguins both opened with roughly the same series odds but TB jumped 145 cents after their home win in Game 1 and PIT jumped 200 cents after theirs. The main reason? Oddsmakers are taking into account how the rest of the series will play out and the Rangers could be without star goaltender Henrik Lundqvist due to injury.

Now what happens when a big favorite wins Game 1 at home like the Caps or Stars? Sportsbooks are inclined to move these series prices even higher, but do they increase at the same rate?

Washington, another large favorite, increased from -265 to -650, a change of 385 cents. That means that their odds of winning the series moved from 72.6% to 86.6%, a 14% increase. Part of the reason for the huge jump was injury-related, as the Flyers will be without one of their top forwards Sean Couturier for the remainder of the series.

So what can we conclude from all this? Whether the road dog wins Game 1 or the big favorite wins Game 1, the relative probability to advance is nearly the same at around 14%.

Keep in mind these are based on Game 1 only, and we’ll be updating the series odds throughout.