2016 NFL Betting: Which Head Coach Will Be Fired First? 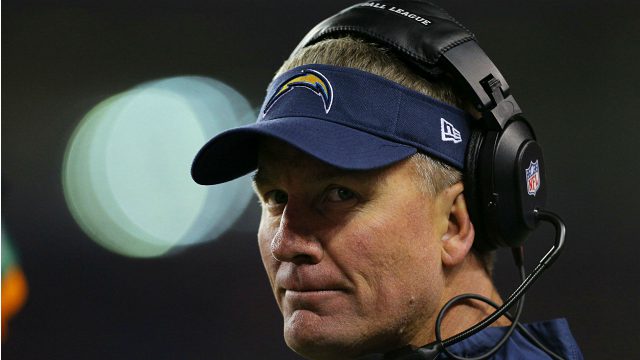 2016 NFL Betting: Which Head Coach Will Be Fired First?

Every team enters the upcoming NFL season with a clean slate but, according to oddsmakers, some head coaches are already on the hot seat. Back on August 1st, the oddsmakers at 5Dimes posted odds for the first head coach to be fired during the 2016 campaign.

Mike McCoy led the San Diego Chargers to consecutive nine-win seasons in his first two seasons as head coach, but last year was a complete and utter disappointment. During the 2015 campaign, the Chargers finished last in the AFC West with a 4-12 record, which marked the franchise’s worst season since 2003 when Marty Schottenheimer was the head coach.

On Tuesday, August 9, the oddsmakers at Bookmaker also posted odds for the first NFL head coach to be fired. In a small surprise, they listed Caldwell as a slight favorite over McCoy. For what it’s worth, Bookmaker is considered to have sharper lines than 5Dimes, and they’re taking larger limits with $2,000 max bets.

Following Week 1, Bookmaker reopened its odds on the first NFL head coach fired with Jeff Fisher (+335) now listed as the favorite. Although I have previously expressed displeasure in Fisher, this was fairly surprising since the team had recently engaged in contract extension talks.

After the conclusion of Week 2, Bovada posted odds with Rex Ryan (+150) listed as the favorite to be fired. Less than 24 hours after losing 37-31 to the Jets in their home opener, Ryan fired offensive coordinator Greg Roman. This shocked the football world since most people expected that his brother, defensive coordinator Rob Ryan, was more likely to get the ax.

The table below displays the latest odds at 5Dimes, Bookmaker and Bovada.

The section below was published on August 9, 2016

One interesting name on this list is Jacksonville’s Gus Bradley. Although oddsmakers believe there’s a good chance that he could be canned, they also believe he’s a strong Coach of the Year Candidate. Bradley is listed at 15/1 to win this prestigious award at 5Dimes and 18/1 at Bovada.

Personally, I think that Rams head coach Jeff Fisher should be listed as the favorite and could be offering some value at 7/1. In his tenure as the Rams head coach, Fisher has gone just 27-36-1 with losing records in all four seasons.

This organization will be looking to make a splash as they enter a new marketplace with a new franchise quarterback in Jared Goff. Teams tend to struggle with rookie quarterbacks behind center, and the Rams will be no different. Fisher may be the proverbial cockroach of NFL coaches, but his tenure is likely coming to a close.

Who do you think will be fired first? Will Fisher finally get canned? Please leave your comments in the section below.