2015 MLB Playoffs: Betting Against the Public After a Win 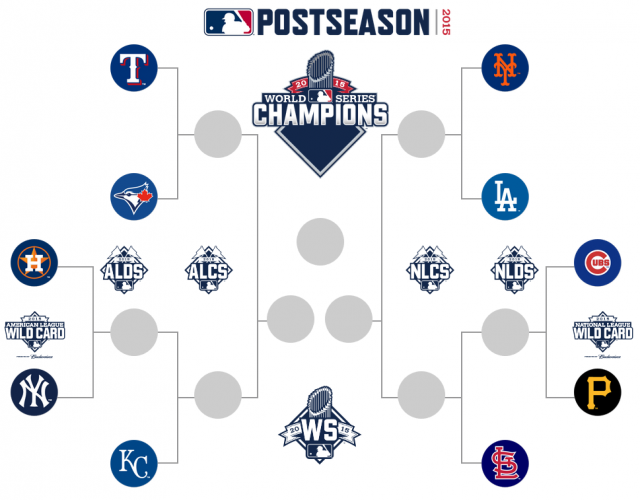 2015 MLB Playoffs: Betting Against the Public After a Win

The MLB Playoffs started on Tuesday with the Houston Astros defeating the New York Yankees in the AL Wild Card game. With the postseason underway, we typically see a large change in public betting with bettors far more likely to take underdogs than they are during the regular season. We also see a massive increase in the volume of bets, which means that many of our regular season contrarian strategies can be thrown out the window.

Before the start of the season, we published our 2015 MLB Betting Against the Public report which highlighted a system that had gone 240-261 with +107.59 units won and a 21.5% return on investment (ROI). Aside from our contrarian filters, the system looked at a number of historically profitable factors including small underdogs with high totals against quality opponents. During the 2015 season, this system went 8-3 (+8.59 units won), but we had to make tweaks for the postseason.

The first step was to identify whether betting against the public was profitable during the MLB Playoffs and, if it had been a winning strategy, what was the sweet spot? During the regular season we had focused on teams receiving less than 30% of moneyline bets, but there had only been 18 teams fitting that criterion in the past decade. However, we found that teams receiving less than half of public bets had gone 178-159 with +49.87 units won and a 14.8% ROI.

While this basic contrarian filter had been profitable, there was no schism between underdogs and favorites like there have been during the regular season. Although the public still typically takes the favorite during the playoffs, there are still a large number of public dogs.

With underdogs and favorites both providing impressive returns, we wanted to find another way to improve our returns — that’s when we remembered the Zig-Zag theory.

For those who are unfamiliar, the Zig-Zag theory is very basic — during the postseason simply bet on whichever team lost the previous game. The idea behind this is that teams are more motivated to win after a loss and that the suits in the league office want longer series for increased revenue. The system mentioned in our most recent NBA Zig-Zag theory article has produced a 78-48 ATS record with +25.92 units earned, so we wanted to know whether this phenomenon also exists during the MLB Playoffs.

To answer this question, we utilized our Bet Labs software to focus on teams coming off a loss. Much to our surprise, this addition actually resulted in a loss of 40+ units with our ROI dropping by more than 50%. However, when we focused on teams coming off a win our system actually improved to 111-91 (+41.03 units, 20.3% ROI).

Our data for the other five major US sports indicates that teams off a loss have been historically undervalued. It also fits our philosophy of buying on bad news, which is a key component of contrarian betting. So why has the opposite been true for baseball bettors?

One potential answer is that the folks down at the league office are the driving force behind the success of the Zig-Zag theory and that NBA referees have much more impact on the game than MLB umpires. While umps have control of the strike zone, NBA refs can completely control the flow of the game.

If you’re not a believer in these conspiracy theories, there is a much easier answer: Bettors simply overreact to the concept of a “must-win” game. Our past research indicates that NFL teams fighting for a playoff spot in the last three weeks of the season have been vastly overvalued, so perhaps the same logic applies here.

Every game is an independent event, and the outcome of the previous game has zero impact on upcoming events. Let’s pretend that you’re flipping a coin, and it comes up heads for ten consecutive flips — the probability of coming up heads on the next flip is still 50%. However, an uneducated individual may take tails because they think it’s unlikely that it will come up heads 11 times in a row. After all, the odds of that happening are just .0488%.

If enough people share this inaccurate philosophy, sportsbooks would need to shade their lines to encourage action on the other side. This means that opportunistic contrarian bettors would gain value solely based on flawed public perception.

A majority of our past system picks have been on the underdog, and historically underdogs have been undervalued in divisional games. This is because the familiarity between the two teams levels the playing field which disproportionately benefits the team getting plus money. However, once again this profitable regular season trend is flipped on its head during the postseason. Although it’s a small sample size, team’s fitting these criteria have gone just 4-13 in divisional games but 85-58 in all other games. This point is important because the winner of Wednesday’s Cubs/Pirates game would face off against their NL Central rival — the Cardinals.

While we would recommend taking every game that fits this system, there actually is one additional filter that can increase our return on investment even farther. Bettors have a tendency to overvalue past results — even dating back to the previous season. Even after a 162-game regular season, bettors are more comfortable taking teams that they are familiar with.

Last season the Royals, Pirates, Cardinals and Dodgers all made the playoffs and that may cause bettors to overvalue these teams.

You can see that it has been profitable to take both playoff and non-playoff teams from the previous season, but the return on investment is more than three times higher for non-playoff teams.

We offer a 6-day Bet Labs trial for anybody interested in creating their own winning MLB Playoff betting systems, Current Bet Labs customers can also copy this system from the Think Tank to receive all current game matches via e-mail or text message.

Our free MLB odds page allows bettors to view the latest odds, injuries, futures and other valuable information. Looking for our best picks and trends? Pro customers have full access to our Best Bets and Bet Signals along with real-time odds, public betting trends and much more.