Why Are Bettors Avoiding Gonzaga in the Elite Eight? 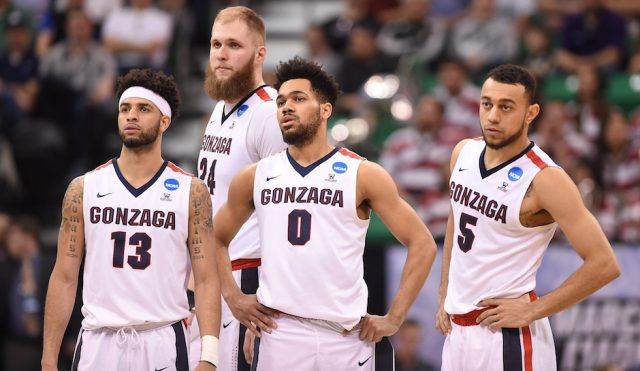 Why Are Bettors Avoiding Gonzaga in the Elite Eight?

It’s human nature to root for winners and scoring, which is why recreational bettors typically gravitate towards favorites and overs. Casual bettors are often very reactionary and place an inordinate amount of importance on the most recent games. Sportsbooks understand these tendencies and shade their lines accordingly. Sportsbooks do not look to balance their books. They look to exploit sports bettors’ tendencies by shading favorites and overs.

Since 2005, the majority of college basketball bettors have supported the favorite in nearly 80% of regular season games. This has historically created value for any bettors willing to go against the grain and back the underdog, however, that’s not necessarily the case during March Madness. Although betting against the public continues to be a profitable strategy, bettors become increasingly willing to take the underdog.

During the 2017 NCAA Tournament, the majority of spread tickets have been placed on the favorite in 39 of 56 (69.6%) games. In these games, they favorite has gone just 15-21-3 ATS. In the 17 games where the underdog has received the majority of spread tickets, the favorite has gone 11-5-1 ATS. That makes the early betting trends for Saturday’s West Region Final particularly intriguing.

Gonzaga (35-1 SU, 22-9 ATS) has been the third-best ATS team in the nation this season, but bettors still don’t seem to fully believe the hype. After holding off West Virginia in the Sweet 16, the Bulldogs opened as 8.5-point favorites against Xavier (24-13 SU, 18-18 ATS). Not surprisingly, public bettors are eager to back the red-hot Musketeers after consecutive upset victories over Maryland (closed +126 on the moneyline), Florida State (+270) and Arizona (+310).

According to our public betting trends, Xavier has received 81% of early spread tickets and 63% of spread dollars. That’s remarkable considering that only two underdogs have ever received at least 75% of spread tickets during the NCAA Tournament — and both of them failed to cover.

Early public money on the underdog caused the line to drop from Xavier +8.5 to +8 at CRIS shortly after opening, but that line moved back to Xavier +8.5 just five minutes later. This number was bouncing around earlier, but it seems to have settled at Gonzaga -8.5…at least for now.

Underdogs coming off an upset win (closed as underdog) have received the majority of public bets in almost 40% of tournament games, and underdogs coming off an expected win (closed as favorite) have received the majority in public bets in just 25% of their games. Bettors believe that Xavier is legit following their win over Arizona, and that’s clearly affecting public betting. The overall volume is still low, but I’m curious to see whether this one-sided public betting will force oddsmakers to adjust their spread in this game.

Parlay percentage is another excellent indicator of square money since you won’t find many sharp bettors taking parlays. At the time of publication, 75% of bettors who parlayed or teased this game had taken Xavier. I don’t believe the current splits will continue, but it’s fascinating to see arguably the best team in the nation receiving such limited support from the public.

Interested in checking out our new money percentages and line charts for every college basketball game? Sign up now for a 4-day trial of Sportsbook Insider Pro. In addition to the features shown in this post, subscribers also have access to our entire suite of live odds, public betting data, and our Best Bet picks.