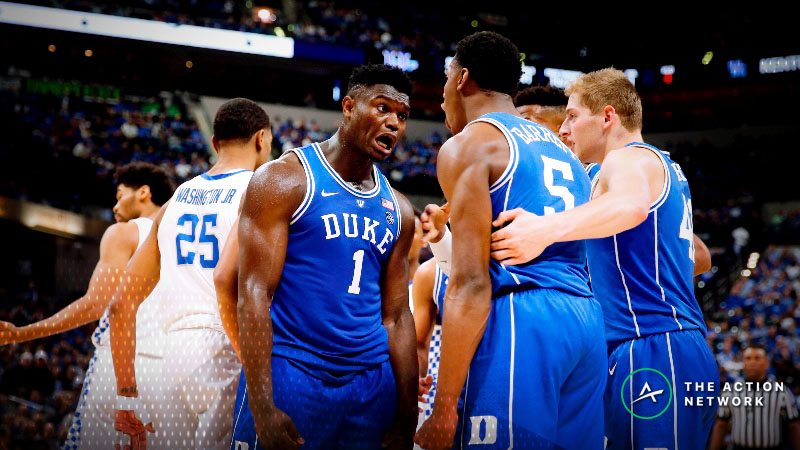 In the Champions Classic, Duke smashed Kentucky by 34 points. The 118-84 defeat was the worst loss of Kentucky coach John Calipari’s career.

Duke’s performance on opening night sent a message. Oddsmakers agree as Coach K’s team is a +400 favorite (bet $100 to win $400) to win the national championship at MyBookie.

After watching last night’s game, it is hard to imagine the Dookies losing, but it is important not to overreact to one game.

Using Joe Lunardi’s preseason Bracketology, we ran 10,000 simulations of the 2019 NCAA Tournament. By comparing our projections to the current odds, we can determine if there is value betting Duke to cut down the nets.

Coach K’s teams is projected to win the Big Dance in only 10.5% of simulations, meaning there is no value in placing a bet at +400 odds.

It’s not just the numbers that are against Duke, history hasn’t been kind to preseason favorites either. According to SportsOddsHistory, only one preseason favorite in the past 10 years won the title – North Carolina in 2008-09.

This doesn’t mean Duke won’t win its sixth NCAA Tournament, it just means the Blue Devils are overvalued by the current betting market.

If you are not a Duke fan and are still reading, I have a treat for you. While the Blue Devils are overvalued, our analysis has identified two teams worthy of futures bets.

For those wondering, these simulations have been accurate in the past. Our 2016-17 preseason projections highlighted North Carolina as a team with value.

The Tar Heels made us look good by winning the title as our readers were able to jump on UNC at a tasty +2000.

Last season we named Villanova as the most likely team to win it all and locked in the Wildcats at +1852. Nova won its second title in three seasons and cashed another winner.

Based on the difference between implied probability and projected chance, these are the two best bets to make to win the national championship:

Duke is the betting favorite, but Kansas is the team most likely to win the championship according to the simulations. There is a reason that the Jayhawks were No. 1 in the preseason poll – they are loaded with talent.

Bill Self recruited a pair of five-star freshman in Quentin Grimes and Devon Dotson. Seven-footer Udoka Azubuike is expected to take another step forward and transfer Dedric Lawson, who averaged 17.5 points and 9.6 rebounds for Memphis, is eligible to play after sitting out last season.

Kansas is going to win the Big 12 again and come March will likely be a 1-seed. Duke, Kentucky and Gonzaga all have shorter odds to win the tournament, but the Jayhawks are the most undervalued team in the country.

Last season saw Virginia win 31 games and earn a No. 1 seed in the NCAA tournament … but we all remember how that ended. After becoming the first 1-seed to lose to a 16-seed, gamblers are overlooking UVA.

Tony Bennett’s team will once again be a nightmare for opposing offenses. According to KenPom, the Hoos are projected to be No. 1 in defensive efficiency led by potential lottery pick De’Andre Hunter.

Some call Virginia’s style of play boring, but its strong defense could help the Cavs make it back to the Final Four for the first time since 1984.