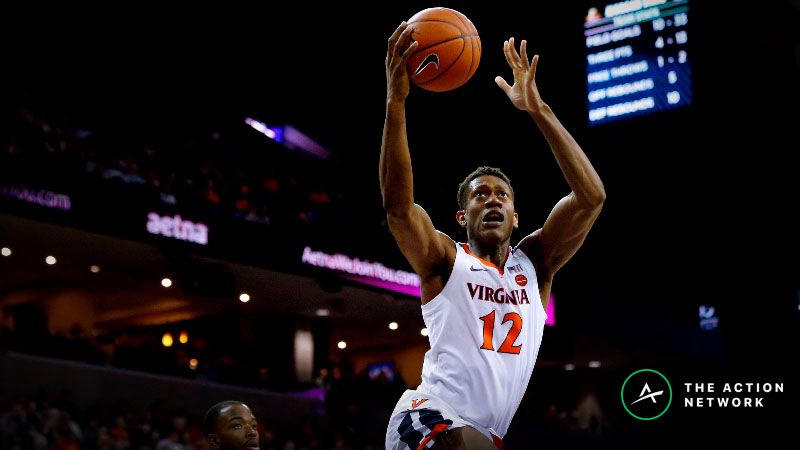 The week after the Super Bowl is college basketball’s unofficial starting point for the casual fan. With that in mind, here is an early March Madness primer with the Cinderellas, sleepers and busts you need to know.

Using Joe Lunardi’s latest Bracketology, we simulated the NCAA tournament 10,000 times to determine the most likely champion as well as the teams that can make or break your bracket.

When you think of a Cinderella run, Sister Jean and Loyola-Chicago come to mind. Last year the Ramblers reached the Final Four as an 11-seed. Which team will wear the glass slipper this year?

These are Cinderella teams (double-digit seeds) with the best chances to reach the Sweet 16:

Wofford is the first Southern Conference team to start 11-0 in league play in 10 years. Of the four losses on the Terriers’ record, three came against ranked power conference programs.

Wofford might be a mid-major but according to KenPom’s adjusted efficiency margin, the team ranks 31st in the nation.

The Hoosiers ended a seven-game losing streak with a signature win against No. 6 Michigan State on Saturday. Indiana upset the Spartans as a 13.5-point underdog in East Lansing.

Archie Miller’s squad suffered a scare when star forward Juwan Morgan went down with a shoulder injury in Saturday’s game, but he returned to practice this week and won’t miss any time. When healthy, Indiana can beat the best teams in the country.

Don’t let the record fool you, this Texas team is good. The Longhorns have faced the ninth-toughest schedule in the country but still rank in the top 25 in defensive efficiency. The Horns will be a tough out come tourney time.

If you are going to win your bracket pool you need to pick teams others are avoiding. Here are teams seeded fifth or worse with the best chances to reach the Final Four:

Ethan Happ is a potential 1st-team All-American. The Wisconsin forward averages 18.5 points, 10.3 rebounds and 5.1 assists per game. Happ’s play has helped the Badgers win five in a row including victories over two ranked opponents.

Generally, dark horse candidates to reach the Final Four boast an adjust offensive efficiency of 114.0 or higher and an adjusted defensive efficiency score of 96.2 or less. Iowa State is one of nine teams in the country to meet both qualifications.

Texas Tech is third in the nation in adjusted defensive efficiency, is first in effective field goal percentage allowed (41.7%), fourth against the three pointer (27.3%) and is also 26th in the nation in blocked shots (4.8 per game).

They say defense travels and the Red Raiders are well-positioned to make a deep run in March.

Watch out for these teams seeded fourth or better that could bust your bracket.

Marquette is No. 10 in the AP Top 25 but ranks 26th in ESPN’s BPI and KenPom. The Golden Eagles have done most of their damage at home with an undefeated record this season but … checks notes … no NCAA tournament games will be played in Fiserv Forum.

Ten in a row. The defending champions are streaking and many have forgotten Villanova’s early-season struggles when the team had four losses by mid-December and fell out of the Top 25.

The Wildcats love the three ball and 42.8% of all the team’s scoring comes from behind the arc. Live by the three, die by the three. If Nova isn’t hitting shots it could be an early exit for Jay Wright’s team.

The biggest knock on Houston is the team’s schedule. According to KenPom, the Cougars have played only the 146th-toughest slate of opponents and has only two quality wins (wins against current top 50 BPI teams). It is hard to trust a team that hasn’t proven it on the court against the best in the country.

Rick Barnes took Texas to a Final Four in 2003. If he could guide Tennessee to the final weekend he would become the 16th coach to lead multiple teams to the national semifinal. As the top-ranked team in the nation, Barnes has the Vols well positioned, but our model gives Tennessee the worst odds of the 1-seeds to reach the Final Four (25.6%).

Defense has been an issue for Tennessee having conceded 68.0 points per game (91st). Can the Vols get enough stops once the tournament begins to match the expectations of their ranking and seed?

The Action Network’s simulations give the team a 24.0% chance — second to only Duke (27.0%). After becoming the first 1-seed to lose to a 16-seed in last year’s tournament, many gamblers might overlook UVA but that would be a mistake.