Who Will be the Next Football Coach at LSU? 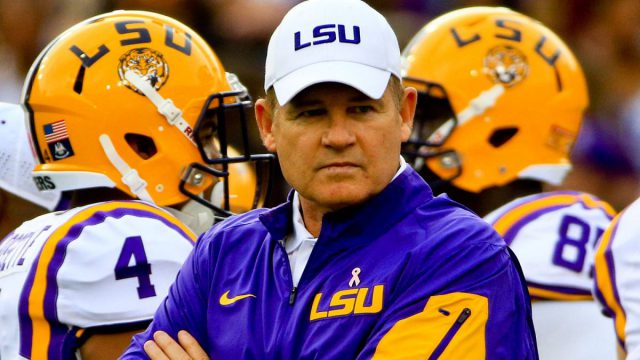 Who Will be the Next Football Coach at LSU?

After a 2-2 start to the season, LSU parted ways with football coach Les Miles and offensive coordinator Cam Cameron. In 12 years as head coach, Miles went 114-34 straight up but only 69-75 against the spread (ATS). Ed Orgeron, the former defensive line coach, was named interim coach for the remainder of the season.

Just two days later, BookMaker.eu opened odds on who will replace Miles as the next full-time head coach of the LSU Tigers. Houston’s head coach, Tom Herman, was listed as the early favorite at even money. Florida State’s Jimbo Fisher, who served as LSU’s quarterback coach and offensive coordinator from 2000 to 2006, was listed with the second-shortest odds at +250.

Shortly after those odds were posted, TopBet.eu also posted odds on the LSU head coach for the 2017-18 season. Although Herman and Fisher were listed with the best odds of replacing Miles, there were several major discrepancies including the omission of top candidates like Kliff Kingsbury and Ed Orgeron. They also listed Alabama’s Nick Saban as a long-shot candidate with 500/1 odds. Even with a massive potential payout, that seems like a sucker bet.

Roughly one week after Bookmaker initially posted this prop bet, they updated their odds with several notable changes. Former Baylor head coach Art Briles, who was fired in May following revelations of misconduct by Baylor football players, saw his odds improve from 50/1 to 15/1 based on early sharp money. “One of our most respected college football bettors came in and hit Briles a handful of times at different numbers before backing off,” according to Scott Cooley, an Odds Consultant for Bookmaker. “We’ve seen some sharp action on Fedora and Kiffin as well, but nothing like the liability we have on Briles.”

On October 24th, Bookmaker once again updated their odds on the next LSU head coach. Despite early sharp money on Briles, his odds of being the Tigers’ head coach for Week 1 of the 2017 season have dropped from +1500 to +5400. Ed Orgeron, who has won all three games since being installed as interim coach, has seen his odds improve from 23/1 to 20/1 to even money.

The table below displays the current odds at Bookmaker and TopBet. It will be updated as new information becomes available.

While we wait for this story to develop, make sure to track the latest odds and public betting trends on our free college football odds page. Interested in following our winning picks? Sign up for a 4-day trial of our Pro subscription for just $49!

Who do you think LSU will hire? Are there any dark horse candidates that oddsmakers are overlooking? Please leave your thoughts in the comment section below.