Who Will be the Next Football Coach at California? 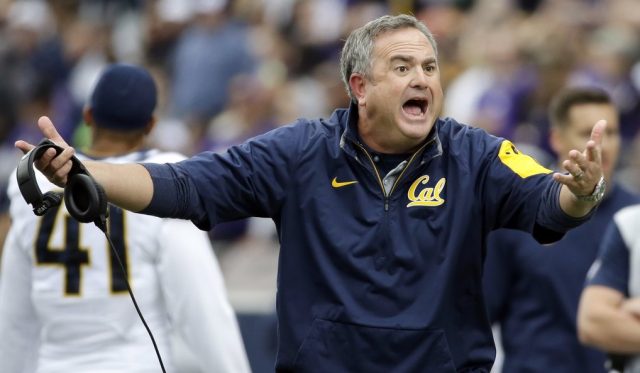 Who Will be the Next Football Coach at California?

On Sunday (1/8) afternoon, the California Golden Bears relieved Sonny Dykes of his duties as head football coach. Over his four seasons as head coach, the Golden Bears went 19-30 straight up (SU) and 20-29 against the spread (ATS).

After going 1-11 in his first season with the school, Cal improved to 5-7 in 2014 and 8-5 in 2015 — a season in which quarterback Jared Goff set numerous school records and was selected with the number one overall draft pick in the NFL Draft. This past season Cal regressed significantly, going just 5-7 and struggling on the defensive side of the ball.

On Tuesday (1/10) morning, Bovada opened odds on who will replace Sonny Dykes as the next full-time head coach of California. In an interesting development, Wisconsin’s defensive coordinator, Justin Wilcox, opened as the +200 favorite. Offensive coordinator Jake Spavital, who is serving as interim head coach, has the second-shortest odds at +250.

By Tuesday afternoon, Bookmaker had also posted odds on the next Cal head coach with Spavital (+150) listed as the favorite. They had also listed several new candidates including Washington offensive coordinator Jonathan Smith, Carolina Panthers head coach Ron Rivera and the field.

The table below compares the current odds at Bookmaker and Bovada. It will be updated as new information becomes available.

Bookmaker is a much sharper sportsbook, and they accept slightly higher limits than Bovada on these type of prop bets. In this case, they’re accepting max bets of $250. It’s also interesting to see that Bookmaker is offering more lucrative odds on Wilcox (+300 vs. +200), Martin (+750 vs. +300) and Miles (+2000 vs. +600). Bovada isn’t offering an option for the field, so it’s entirely possible that none of these candidates are hired and they won’t have to pay out.

While we wait for this story to develop, make sure to track the latest odds and public betting trends on our free college football odds page. Interested in following our winning picks? Sign up for a 4-day trial of our Pro subscription for just $49!

Who do you think Cal will hire? Are there any dark horse candidates that oddsmakers are overlooking? Please leave your thoughts in the comment section below.