Where is Sharp Money Going in Game 2 of the Western Conference Finals? 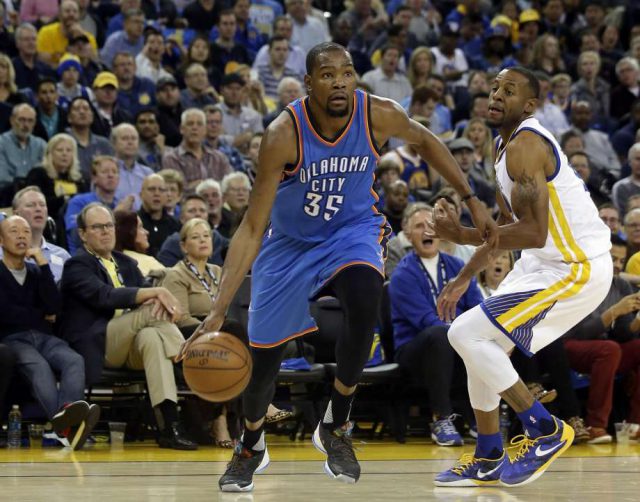 Where is Sharp Money Going in Game 2 of the Western Conference Finals?

On Monday night the Oklahoma City Thunder accomplished something that no other team had this off-season — they defeated the Warriors at Oracle Arena. Despite trailing by 13-points at halftime, Kevin Durant and Russell Westbrook rallied their teammates to pull off the improbable comeback.

During the regular season Golden State posted an astounding 39-2 record at home and they have continued that success during the first two rounds of the playoffs. This shouldn’t come as news to any basketball fans who watched the 8-seeded Warriors dismantle the 1-seeded Mavericks in front of a boisterous home crowd in the 2007 playoffs.

[On the go? Download the Sports Insights app for live odds, trends, injuries and more ]

Also known as “Roaracle,” the Warriors home crowd has frequently been compared to a jet engine with decibel levels in the 100 to 120 range. This deafening noise has also been advantageous to bettors. Since 2005, the Warriors have gone 267-226 ATS (+25.96 units) at home which trails only the San Antonio Spurs. With Steve Kerr as head coach, the Warriors have gone 58-41 ATS with +13.57 units won — roughly the same amount as the next two teams combined.

Despite their Game 1 loss, oddsmakers believe that the Warriors will even the series tonight. After closing as 7.5-point favorites on Monday, the Warriors opened as 8-point favorites for Game 2 at the market-setting Bookmaker.eu. At the time of publication, public betting was fairly even with Golden State receiving 57% of spread bets.

>The table below, which is available to Sportsbook Insider members, displays the public betting breakdown at our seven contributing sportsbooks.

It’s interesting to see that arguably the squarest sportsbook, Sports Interaction, has seen one-sided action on the Thunder. Quite frankly, I’m somewhat surprised to see that more bettors haven’t been taking Oklahoma City and the points after their impressive performance in Game 1. I assumed that this would be an opportunity to fade the trendy underdog, but that hasn’t been the case.

At the time of publication there hadn’t been any steam moves or smart money alerts triggered on the game, however, there are a few trends that point towards potential value on the Warriors including the past performance of large playoff favorites.

The Warriors fit our most recent NBA Zig-Zag theory betting system, and this might be an excellent opportunity to buy low. According to our Bet Labs software, playoff favorites have gone 108-71 ATS (60.3%) since 2005 when they failed to cover the spread by double-digits in their previous game.

There may be slight value on the Warriors -8.5, but the far more interesting storyline involves the over/under. Bookmaker opened the total at 222, which would tie for the tenth-highest total in our database. Despite this lofty total, 73% of tickets and 93% of the money have taken the over.

With overwhelming public support on the over, you would expect that Bookmaker would increase the total to encourage action on the under. However, the total remains unchanged at 222.

Square bettors love rooting for high-scoring games, which is why the under has historically provided contrarian value. During the postseason when the volume of bets increases significantly, that value is magnified. Since 2005, the under has gone 510-470 (52%) during the NBA Playoffs. When the under hit in the previous game, that win rate increased by 2.7%.

People will readily acknowledge that defensive intensity picks up during the postseason, but for some reason bettors are still unwilling to take the under. According to my research, a majority of public bettors have taken the under in just 10.7% of playoff games over the past eleven years.

These numbers are subject to change before tip-off, so bettors should be sure to visit our free NBA odds page for the latest lines, injuries, public betting trends and more. We also would like to stress that the only picks we fully endorse are our Best Bets, which are available exclusively to Sportsbook Insider Pro members.