Where is Sharp Money Going in Game 1 of the 2016 NBA Finals? 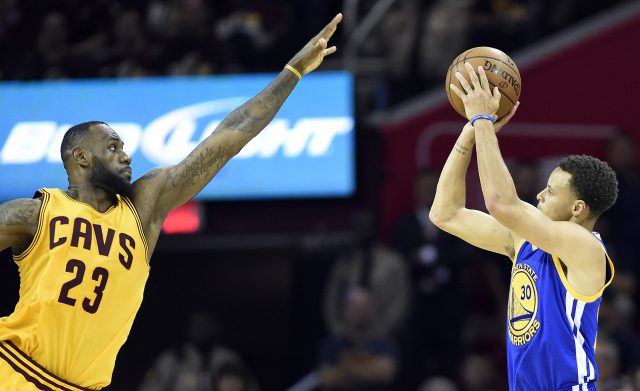 Where is Sharp Money Going in Game 1 of the 2016 NBA Finals?

Last week in this space I examined the public betting trends for Game 5 of the Western Conference Finals and determined that the Warriors were offering tremendous value as 7.5-point favorites against the Thunder. They would ultimately win the game by 9-points and cover the spread.

The prior week, I highlighted value on the Warriors (-8.5) and the under (222) in Game 2 of the Western Conference Finals — both of which won with ease. In this week’s edition, I’ll explain how Sportsbook Insider subscribers can identify sharp money in Game 1 of the 2016 NBA Finals.

In a rematch of last year’s Finals, the Golden State Warriors opened as 5.5-point favorites against the Cleveland Cavaliers at the market-setting Pinnacle sportsbook. That line was fairly interesting since the Warriors were 6.5-point favorites when these two teams faced off on Christmas Day. Golden State won that game by six, but it was more noteworthy that they received less than 50% of spread bets (43%) for one of just seven times all season.

Although they were recently on the verge of elimination against the Thunder, public bettors seem to be slightly more optimistic about the Warriors prospects tonight. At the time of publication, Golden State was receiving 56% of spread bets and 66% of total dollars wagered.

The screenshot below displays the public betting breakdown at our seven contributing offshore sportsbooks.

Despite this evenly split public betting, the Warriors have moved from -5.5 to -6 at Pinnacle. It could be argued that the spread moved because two-thirds of the money has taken Golden State, but it appears that sharp money is mainly responsible for this half-point move.

Heading into tonight’s matchup, the Warriors have had just three days between games while the Cavs have had six days between games. This information caused me to wonder about whether additional off days were beneficial. It’s the classic “Rest versus Rust” argument and my findings were highly illuminating.

I found that home teams with at least four days between games have performed exceptionally well, going 85-48 ATS (63.9%) with +32.59 units won since the start of the 2005 season. However, road teams with the same rest have been atrocious.

The clear takeaway is that home teams benefit immensely from extended rest, while road teams have struggled mightily. It’s tough to say definitively what causes this schism, but I could certainly posit a theory.

My hypothesis is that home teams with prolonged rest are able to practice in familiar settings and resume their normal pre-game rituals. This could reduce some of the stress and anxiety from playing in a high-stakes playoff game. Conversely, the travel schedule for road teams could actually cause significant fatigue — especially if they’re flying home to be with their families before playing their next game.

There are reasons to be wary about taking the Warriors, specifically because betting against the public has been extremely effective during the NBA Finals. As I explained in our NBA Finals Betting Preview, teams receiving less than 49% of spread bets have gone 35-25 ATS (58.3%) since 2005. I’ll continue to monitor these public betting trends, but there are far more sharp money indicators pointing towards value on Golden State.

While I would definitely lean towards taking Golden State (-6) on the spread, there are much clearer sharp money indicators on the over/under. The Game 1 total opened at 210 at Pinnacle and, at the time of publication, 63% of bets and 69% of the money were taking the over. Despite that one-sided public betting, the total has dropped from 210 to 208.5 at Pinnacle. That reverse line movement is an excellent indicator that sharp money has pounded the under.

This is the highest NBA Finals total since Game 2 of 1995 Finals when Orlando Magic and Houston saw a total of 212. Despite this historically high total, bettors are still overwhelmingly hammering the over. This is the perfect opportunity to go against the grain and take the under.

It’s also fascinating to compare this total to the totals from the 2015 NBA Finals. Although the Cavs were missing two of their best scorers last year (Kevin Love and Kyrie Irving), the totals were substantially lower and continued to drop throughout the series.

There have been no bet signals triggered on the total, but the reverse line movement and historical trends point to tremendous value on the under.

I would also be remiss if I didn’t mention some of the highly profitable betting systems that have been triggered on the under. When more than 50% of bettors are taking the over yet the total drops at least 1-point, the under has gone 153-115 (57.1%) during the NBA Playoffs. When the closing total is greater than 200 that win rate increases to 63.5%.

Finally, it’s worth noting that Marc Davis will be one of the three referees tonight. Since 2005, the under has gone 340-282 (54.6%) in games officiated by Davis, which makes him the most profitable “under” ref in our database.

Several sportsbooks are still offering Golden State -5.5 and Under 209, so be sure to shop for the best line before placing any bets. These numbers are always subject to change, so make sure to visit our free NBA odds page for up to the moment lines, betting trends, injuries and more.