What Should Bettors Know About the Super Bowl 51 Total? 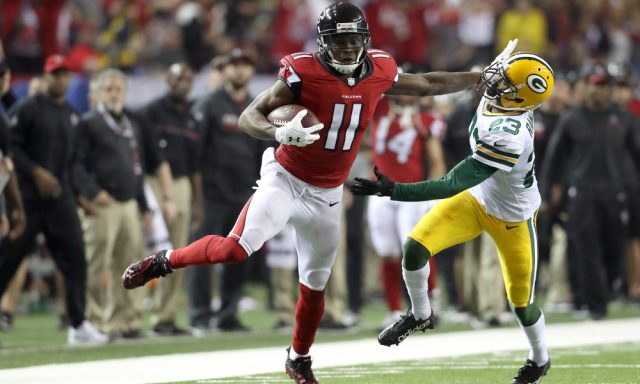 What Should Bettors Know About the Super Bowl 51 Total?

The Atlanta Falcons were the highest scoring offense during the regular season (33.8 points/game) and they haven’t slowed down during the postseason. In two playoff games, the Falcons have tallied 80 total points including Sunday’s 44-21 victory over the Packers in the NFC Championship. On the flip side, Atlanta’s defense ranked 27th in scoring defense (25.4 points/game) and 28th in passing defense (266.7 yards/game). This combination of offensive firepower and defensive ineptitude has allowed the Falcons to be the most profitable ‘over’ team (15-2) this season.

Their opponent, the New England Patriots, ranked third in scoring (27.6 points/game) while boasting a well-balanced attack that included a top-five passing offense (269.3 yards/game) and a top-ten rushing offense (117.0 yards/game). On the defensive side of the ball, the Patriots led the league in scoring defense (15.6 points/game) and were actually one of the most profitable ‘under’ teams (10-6) during the regular season. For what it’s worth, the over has hit in both of New England’s playoff games.

With two of the league’s top offenses squaring off, the Super Bowl 51 total opened at 57.5 at the market-setting Pinnacle sportsbook. Although this is lower than last week’s NFC Championship total, this marked the highest Super Bowl total in NFL history — just a point higher than Super Bowl 44 between the New Orleans Saints and Indianapolis Colts (opened 56.5).

The table below displays the closing total for every single Super Bowl matchup.

Although there wasn’t a total posted for Super Bowl 1, you can see that Super Bowl overs have gone 25-24 overall and the closing totals have been steadily increasing. Bettors love high-scoring games and naturally gravitate towards the over — especially in a matchup of two elite offenses. In our historical database, which goes back to 2003, the over has never received less than 46% of tickets in the Super Bowl.

Not surprisingly, bettors have been hammering the over for Super Bowl 51. According to our public betting trends, 66% of tickets and 79% of total dollars wagered have taken the over. This one-sided public betting has caused the total to increase from 57.5 to 58.5 at Pinnacle.

It’s interesting to note that Pinnacle was the last offshore sportsbook to move their Super Bowl 51 total to 58.5. It’s also worth noting that Sunday’s total actually reached 60 at Jerry’s Nugget for 90 minutes on Thursday, although it has dropped to 59 since that time.

“Given the efficiency of these offenses, we did not hesitate making this the highest total in Super Bowl history,” stated Scott Cooley, a spokesman for Bookmaker. “The public bettors won’t think twice about betting the over, but we do expect to see some smart money on the under.”

This isn’t only the highest total in Super Bowl history, but also one of the highest totals that we have tracked, including both regular season and playoff games. Dating back to 2003, there have been six regular-season games and two playoff games with a total of greater than 57.  At least 60% of spread tickets have taken the over in each of these games, and public bettors have been rewarded with the over going 8-0 despite these lofty totals.

There are only eight NFL teams that play in domed stadiums, but it’s interesting to note that five of these high total games have taken place indoors. Using our historical database, I found the average total at domed stadiums has been roughly three points higher than it has been in outdoor stadiums. That’s a significant development given that the Super Bowl will be played at NRG Stadium, which features a retractable roof. Although there hasn’t been an official announcement yet, it seems safe to assume that the roof will be closed.

Assuming public money continues to hammer the over, it will be interesting to see whether sportsbooks increase the total. The Super Bowl is the most heavily bet sporting event every year, and this causes public money to have a greater impact on the line movement. We still haven’t seen sharp money pick a side on the total, so it will be interesting to monitor this total throughout the week — especially when the limits are increased closer to kick off.

Interested in analyzing our data for the Super Bowl? Sign up for a 4-day trial of our Sportsbook Insider Pro software, for instant access to all of our betting/money percentages, bet signals, and Best Bet picks for all sports.