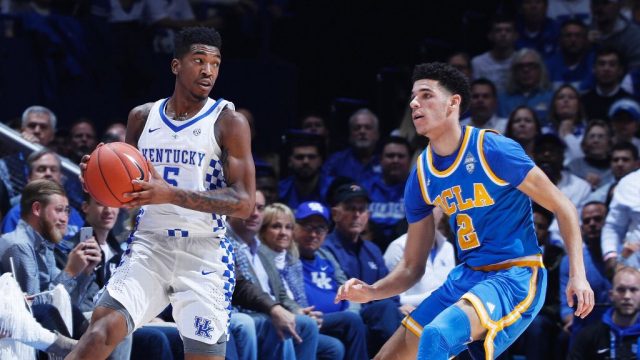 Since firing Billy Gillispie and hiring John Calipari as their head coach, Kentucky has re-established themselves as one of the most dominant programs in Division 1 athletics. Since 2009, the Wildcats have gone 248-52 straight up (SU) and 139-139-9 against the spread (ATS) while accomplishing a number of impressive feats. Kentucky has won the SEC Tournament five times, made four appearances in the Final Four, and won the 2012 National Championship. Calipari has consistently produced the nation’s top recruiting classes, resulting in 28 NBA Draft picks.

Over the past eight seasons, Kentucky has been favored in nearly all of their games. In fact, the Wildcats have been underdogs on just 21 occasions since hiring Calipari including twice in the past three seasons (+5.5 against Kansas on 1/30/16 and +1.5 against Florida on 2/4/17). They’ve also received the majority of spread tickets in 79.4% of all games.

Since hiring John Calipari, #Kentucky has been favored in 266 of 287 games.

Kentucky is one of the most public teams in the nation, but that hasn’t been the case for their Sweet 16 matchup against UCLA. After opening as 1-point underdogs at the market-setting Pinnacle sportsbook, the Wildcats have received just 32% of spread tickets and 21% of spread dollars. In fact, the majority of bettors have backed the Bruins at all seven of our contributing sportsbooks.

Despite receiving such limited public support, Kentucky has actually moved from +1 to -1 at Pinnacle. Line movement that contradicts our public betting trends is known as reverse line movement, and it’s an excellent indicator of sharp money.

If the majority of bettors are taking the Bruins, you would think that sportsbooks would make UCLA a larger favorite to help encourage action on Kentucky and mitigate some of their risk. When it moves in the opposite direction, it’s a sign that well-respected bettors are going against the grain and backing the Wildcats.

Kentucky moved from +1 to -1 at Pinnacle on Monday evening and most sportsbooks still have UCLA listed as a 1-point favorite or pick ’em. When a market-setting sportsbook like Pinnacle is deviating from the rest of the market like this, it’s usually a sign that they know something that other books do not. Although the public is hammering UCLA, it would appear that sharps believe Kentucky is the superior team.

Since hiring Calipari, Kentucky has gone 32-22 ATS (60.7%) when receiving less than 50% of spread bets including a 12-4 ATS (75%) record in postseason games. It’s also worth noting we have found value fading the trendy underdog during March Madness, which indicates bettors should steer clear of UCLA. Since 2005, favorites receiving less than 50% of spread bets have gone 115-87 ATS (56.9%) in the NCAA Tournament including a 10-5 ATS (66.7%) record this year.

Additionally, our bracket simulator loves Kentucky and hates UCLA. Surprisingly, we found that Kentucky would defeat UCLA in 63.4% of our simulations.

Kentucky hasn’t received this little public support since February 28, 2015. In that game, they received 27% of spread tickets as 15.5-point favorites against Arkansas (UK won 84-67). It’s rare that there’s contrarian value on Kentucky, but bettors seem to be overreacting to recent events. While Kentucky is coming off a nail-biter against an underrated Wichita State squad, UCLA is coming off consecutive double-digit victories.

Interested in checking out our new money percentages and line charts for every college basketball game? Sign up now for an extended 5-day trial of Sportsbook Insider Pro. In addition to the features shown in this post, subscribers also have access to our entire suite of live odds, public betting data, and our Best Bet picks.