In NFL
By Danny Donahue

If your favorite NFL team is one of 24 no longer playing this season, this is the bet you’ve been waiting for. Well, unless your team is the Browns. 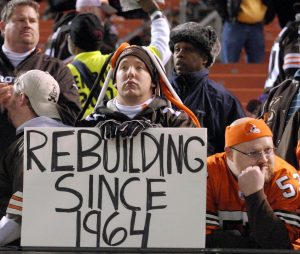 For everyone else, here are the opening Super Bowl LIII odds via the Westgate Las Vegas Superbook.

There aren’t many surprises on the list, but a few teams catch the eye. There’s only 13 months left to place these bets so I’ll try to make this quick.

For the third straight season, the Patriots are at the top of the opening list, though +500 is higher than their January odds in either of the previous two years. Keep in mind that last season New England opened +600 at this time, but they were bet up to +250 prior to Week 1.

Behind the Pats and Steelers, the next eight teams are all in the NFC, led by a three-way tie at +1000. For what it’s worth, Green Bay had reached +500 this season in the week leading up to Aaron Rodgers’ collarbone injury.

Super Bowl LIII will be held in Mercedes-Benz stadium in Atlanta, meaning the Falcons (+1600) will have home-field advantage should they reach the big game. No team has ever played the Super Bowl in their home stadium, though the Vikings have a realistic opportunity (+110 to win NFC) to do so this year.

The 49ers closed out 2017 as the hottest team in the NFL, winning their final five games under newly-acquired Jimmy Garoppolo. They’ll undoubtedly be a popular sleeper pick next year, and they open at +2000, rounding out a ridiculous total of 10 NFC teams between 10/1 and 20/1.

And finally, my favorite takeaway, which comes a bit further down the list. The Titans, who are now just two wins away from this year’s Super Bowl, open at +4000 next season. Their current odds to win it this year? +8000. I’m told they’re playing a pretty good team this week.