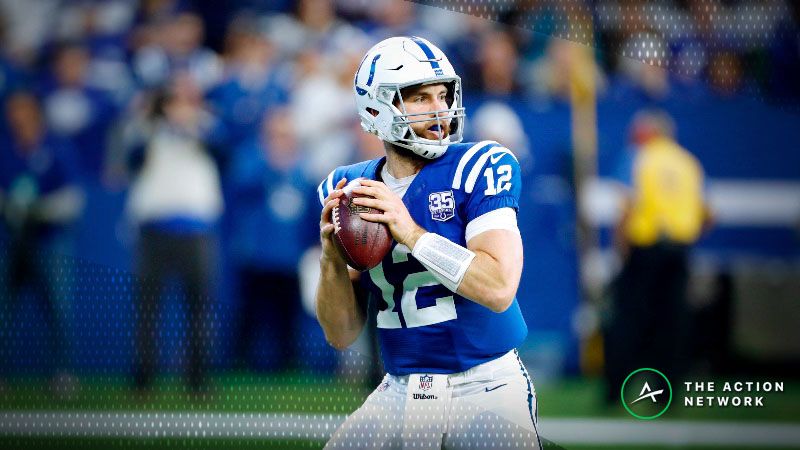 There’s only two weeks left in the regular season and the number of playoff spots available are dwindling.

The Kansas City Chiefs and Los Angeles Chargers have punched their tickets to the postseason in the AFC while the New Orleans Saints, Los Angeles Rams and Chicago Bears have clinched playoff berths in the NFC.

That leaves seven spots up for grabs.

BetOnline is offering prop bets for seven teams to make or miss the playoffs. Based on the difference in implied probability and projected chance using The Action Network’s NFL simulations, the analysis below looks at the two best bets to make and miss the playoffs.

The Colts don’t control their own destiny, which is why Indy is plus-money to make the playoffs. In addition to winning out, Andrew Luck & Co. need a loss by either the Pittsburgh Steelers or Baltimore Ravens.

There is a good chance one or both of the Steelers (+5.5 at Saints) and Ravens (+4.5 at Chargers) lose in Week 16. Assuming the Colts take care of business and either Pittsburgh or Baltimore stumbles, Indy will face Tennessee in a win-and-you’re-in Week 17 matchup.

The Action Network NFL Power Rankings would make the Colts 1.1-point favorites over the Titans in Tennessee.

Will history repeat itself? Last year Nick Foles replaced an injured Carson Wentz and led the Eagles to a Super Bowl title. After upsetting the Rams as 13.5-point underdogs in Week 15, another improbable playoff run wouldn’t shock Eagles fans.

In order for Philadelphia to have a chance to defend its Super Bowl title, two things need to happen. First, the Eagles must win out (duh!). Second, the Minnesota Vikings must lose one of their final two games.

The Vikes are currently 5.5-point favorites in Week 16, but our model would make Kirk Cousins a home underdog to the Bears in Week 17.

There are five scenarios in which the Dolphins could make the playoffs. Good, right? Not really, each is convoluted. For example, one would require the Patriots to lose their next two games. That’s not happening.

The simplest path to the playoffs for the Redskins is to win out and get a loss by the Vikings. The only problem with that plan is that Washington is a double-digit underdog in Tennessee on Saturday.