MLB Game of the Week: Oakland Athletics at Texas Rangers 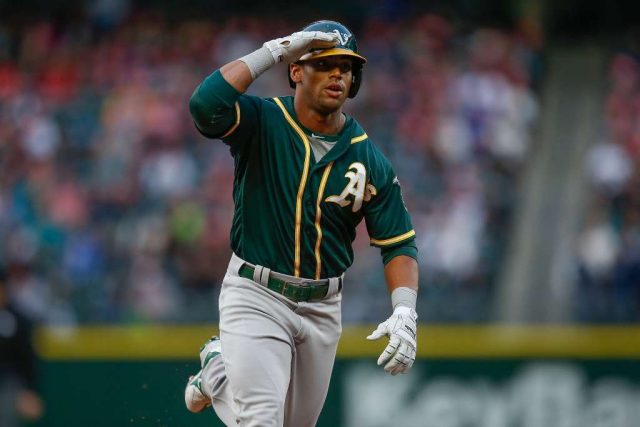 MLB Game of the Week: Oakland Athletics at Texas Rangers

Throughout the season, we will utilize the tools available to Sportsbook Insider subscribers to analyze the most interesting MLB line moves across the sports betting marketplace. By examining sharp money indicators like steam moves and reverse line movement, we will be able to identify which games have been hammered by well-respected bettors and pinpoint the top value plays for contrarian bettors.

There’s a full slate of action today with several new series beginning, but the most interesting game is an AL West showdown between the Texas Rangers and Oakland Athletics. Last season the Rangers were the most profitable team for moneyline bettors (95-67, +27.71 units), earning as much money as the next four teams combined. Despite their prior success, there’s reason to believe bettors should sell high and fade the reigning AL West champs.

The Rangers opened -165 at the market-setting Bookmaker.eu, and early public action has been hammering the home favorite. As you can see from the screenshot below, Texas has received 76% of moneyline tickets with particularly one-sided action at BetUS, Sports Interaction and Sportsbook.com — the three squarest sportsbooks we track.

Despite receiving more than three-fourths of moneyline tickets, the Rangers have actually slipped from -165 to -136 at Bookmaker. Line movement that contradicts our public betting trends is known as reverse line movement, and it’s an excellent indicator that sharp money has taken the Athletics.

That sharp money is confirmed by our money percentages, which show that Oakland has actually received 58% of moneyline dollars. Although the A’s have only received 24% of moneyline tickets, they have received the majority of total dollars wagered. That indicates that large wagers (typically placed by wise guys or betting syndicates) have taken the road underdog.

Since opening, Oakland has moved from +140 to +123 at Bookmaker. The A’s are receiving more dollars than tickets and there’s been a 17-cent reverse line movement, so it’s clear that sharp money has taken the underdog. That’s further confirmed by our bet signals, including a Pinnacle steam move which was triggered on Oakland +135 earlier this morning.

In addition to these sharp money indicators, there are a number of historical trends which point towards value on the A’s. We constantly preach the value of betting against the public, but that’s particularly true when you’re dealing with underdogs in divisional rivalries with high totals.

In addition to this one-sided public betting on the moneyline, we’ve also seen bettors taking Texas in parlays and on the runline. At the time of publication, the Rangers were receiving 84% of runline tickets and 85% of parlay tickets. This further validates our claim that Oakland is offering bettors contrarian value.

Bettors should note that most of the sharp money indicators came down this morning when Oakland was still available between +130 and +135. They’re currently +123 at Bookmaker, which means that some of the value has been sucked out. That said, bettors with access to multiple sportsbooks can still find Oakland +127 by shopping for the best line.

The only plays we officially endorse are our MLB Best Bets, which have gone 8-1 with +6.15 units won to start the season. We have two pending Best Bets for tonight’s games, but those picks are available exclusively to Sportsbook Insider Pro subscribers.