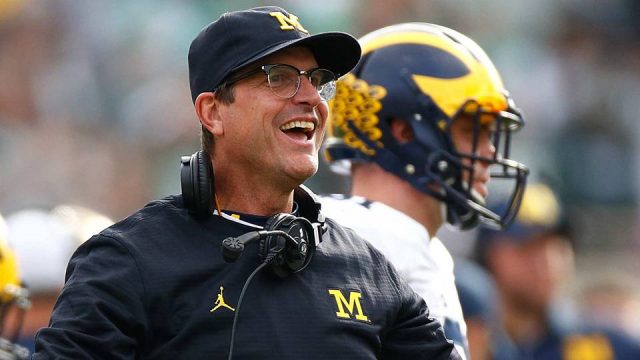 This Saturday, a Big 10 bout between the #8 Michigan Wolverines (3-0) and unranked Purdue Boilermakers (2-1) takes place in Indiana.

Michigan took care of business on the big stage in week 1, beating Florida 33-17 to easily cover the four point spread. Though they have won their past two games as well, they have failed to cover in both.

Purdue, on the other hand, is one of just about a dozen teams remaining in the country with a 3-0 record against the spread. In week 1, they were +25.5 against Louisville, but only lost by seven. In week 2, they were favored by a field goal at home against Ohio, but easily covered and won 44-21. Last week, they were six point dogs in Mizzou, but destroyed them 35-3. So not only are they 3-0 ATS, but they are covering by an average of 25.5 points.

With that being said, 59% of spread bets so far are riding the overachieving Boilermakers, who opened between +8.5 and +9.5 around the market. Also note that this is currently the most heavily bet game of the week.

Despite Purdue being a trendy dog, Michigan has reached -10 at essentially every book around the market. So far, they are getting slightly more money and there has been one steam move triggered on them.

Historically, teams in Purdue’s situation haven’t fared well against the spread. Conference home dogs getting the majority of bets have gone 87-98 ATS and just 22-38 ATS over the past three seasons. However, given Purdue’s success this season, I don’t blame bettors for hopping on the Boiler-Bandwagon. If you’re wondering how teams with a perfect ATS record do in their fourth game in the season…it’s not great. Just over 46% move on to their 5th game with the record intact.

To keep track of the line over the week, bookmark our NCAAF free odds page.