How Has Kevin Durant’s Injury Affected the Warriors Futures? 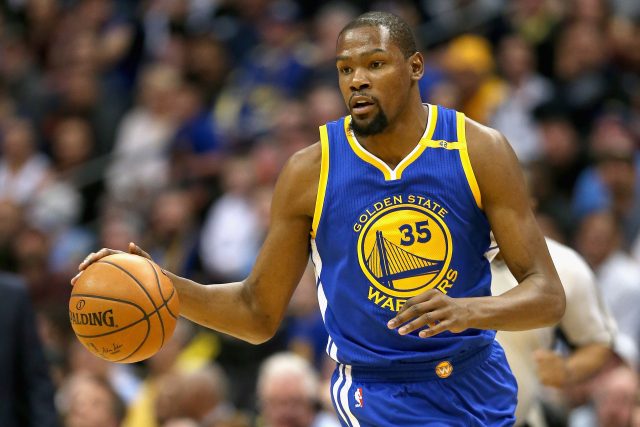 How Has Kevin Durant’s Injury Affected the Warriors Futures?

In the first quarter of Tuesday’s night’s 112-108 loss to the Washington Wizards, Golden State Warriors star Kevin Durant was injured during a loose ball situation in which Wizards center Marcin Gortat fouled Warriors center Zaza Pachulia, who then fell backward into Durant’s left leg. Durant limped away from the incident, and many fans immediately feared the worst.

The Warriors (50-10 SU, 28-30 ATS) currently lead the San Antonio Spurs (45-13 SU, 33-24 ATS) by four games for the top spot in the Western Conference, but this injury obviously closes the gap between the two teams. Durant is averaging 25.3 points, 8.2 rebounds, and 4.8 assists, and was listed with the fifth-best odds (+1400) of winning the NBA MVP Award. The Warriors front office has already reacted to the injury by signing free agent forward Matt Barnes, but that hardly alleviates their concerns.

“They’re saying Durant could be back before the end of the regular season, but you can’t always believe information disseminated at the team level,” according to Scott Cooley, a spokesman from Bookmaker.eu. “We have no reason to believe that his injury is more serious that what we’ve heard, but we have to protect ourselves against that possibility. You also have to factor in the team cohesiveness when he returns. And of course, there is always the possibility of re-injuring the same knee during the playoffs.”

The table below displays how the NBA championship futures have moved at Bookmaker over the past week.

It’s also worth noting that sportsbooks will likely benefit from this news, as bettors hammered the over on the Warriors win total (67.5) before the season. “Absolutely rooting for the under as most of the public pounded the over,” stated Cooley. “We did see some sharp money on the under, but it didn’t offset what we have on the over.” The Warriors would need to go 18-4 over their final 22 games in order for over bettors to cash, and that will be incredibly difficult given Durant’s status.

With Kevin Durant sidelined, Stephen Curry’s value to the spread also increases significantly. Last season Curry was worth roughly 3-4 points to the spread, but that valuation dropped to 2-3 points when the team acquired Durant. Curry has been logging fewer minutes this season, but that could change with Durant out. It’s safe to say that Curry is back to the 3-4 point range now.

Bettors can track the latest odds, public betting trends, injuries and even futures by visiting our free NBA odds page.