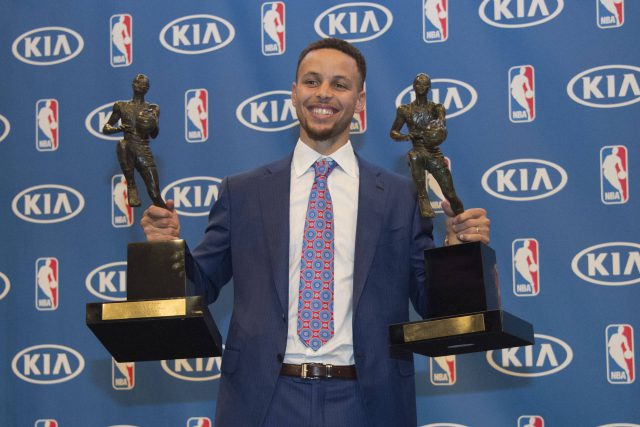 Last season Golden State Warriors guard Stephen Curry averaged 30.1 points, 6.7 assists and 5.4 rebounds per game en route to the first unanimous NBA MVP in league history. This was the second consecutive MVP Award for Curry, who had the second-best odds (+650) before the start of the season.

The table below displays the past ten MVP winners along with their odds to win the award prior to the season. (Historical odds via SportsOddsHistory.com)

On Wednesday (7/6) afternoon, Irish bookmaker Paddy Power released odds for the 2016-17 NBA MVP with Stephen Curry (+250) listed as the favorite. That would be a remarkable achievement considering that only three players (Larry Bird, Wilt Chamberlain, and Bill Russell) have won the MVP in three consecutive seasons. The following day, 5Dimes posted MVP odds for seven players.

With Kevin Durant joining the Golden State Warriors, Russell Westbrook is now front and center as the face of the Oklahoma City Thunder. Based on his past performance with Durant out of the lineup, it was always safe to assume that Westbrook would post an impressive stat line this season.

The table below displays Westbrook’s statistics with and without Kevin Durant in the lineup entering the 2016-17 season.

Last season Westbrook nearly averaged a triple-double with 23.5 points, 10.4 assists and 7.8 rebounds per game, and oddsmakers safely assumed that his usage rate and output would increase dramatically without Durant in the fold. That explained why Westbrook opened with the second-best odds of winning the MVP Award.

This award quickly became a two-man race between James Harden and Russell Westbrook, and there has been constant back-and-forth throughout the season. Stephen Curry, who opened as the MVP favorite at Paddy Power, was surpassed by teammate Kevin Durant shortly after the season got underway.

In recent weeks, Westbrook has re-emerged as the MVP front runner. Harden was still the favorite (-155) at BetOnline in late March and, although they have taken their MVP odds off the board, Westbrook is currently listed as the odds-on favorites (-700) at 5Dimes. One of the biggest line moves happened back on March 30th after Westbrook tallied 57 points, 13 rebounds and 11 assists in a win over the Orlando Magic. That was the most points scored in a triple-double in NBA history.

The table below compares the latest MVP odds at 5Dimes, BetOnline, Bovada, and Paddy Power. We will update this table as new information becomes available.

The section below was originally published on July 7, 2016.

The Westgate Superbook lists the Cleveland Cavaliers as -400 favorites to win the Eastern Conference, and the MVP Award has typically been awarded to the best player for the top-seeded playoff team. Considering that LeBron finally brought a championship to Cleveland yet most of the off-season discussion has centered on Kevin Durant’s decision to join the Warriors, I believe King James will be extra motivated this season.

Last year LeBron was +250 to win the MVP before the start of the season, which makes those +525 odds look mighty tasty. Eight of the past ten award winners opened the season listed at +700 or lower, which also bodes well for the Finals MVP.

Every member of the Warriors should see their numbers dip slightly with the addition of Durant, whereas the Cavaliers will return essentially the same core minus Matthew Dellavedova. Quite frankly, I think Kevin Durant aided James’ quest to win his fifth NBA Most Valuable Player award.

If you’re looking for longer odds and a greater potential payout, Damian Lillard is an intriguing option at +2750. Last season the Weber State product averaged 25.1 points and 6.8 assists per game while helping the Blazers defy expectations with 44 regular season wins and a fifth-place finish in the Western Conference. Assuming he continues to improve and Portland takes another step forward, Lillard could be a viable MVP candidate.

Which players do you think are offering value? Can Stephen Curry win for his third consecutive season? What type of numbers can we expect from Kevin Durant? Please leave your thoughts in the comment section below.