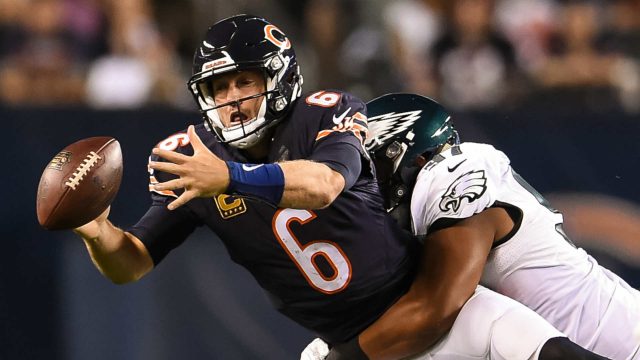 It looks like the Chicago Bears may need to prepare for life without their franchise quarterback. In Monday night’s loss to the Eagles, Jay Cutler suffered a sprained right thumb and is expected to miss this week’s game against the Dallas Cowboys. Although Cutler’s injury will not require surgery, it’s entirely possible that the team’s all-time leading passer will miss several weeks.

Typically fans are devastated when their starting quarterback goes down, but Bears fans seem nonplussed by Cutler’s latest injury. That’s likely due to Cutler’s contract, which makes him one of the highest-paid players in the league. Back in 2014, Cutler signed a seven-year, $126 million contract with the Chicago Bears, including $54 million guaranteed. He may be overpaid, but Cutler still holds value in the eyes of oddsmakers.

On Friday’s lookahead line, the Westgate Superbook listed the Bears as 3.5-point underdogs for their Week 3 matchup against the Dallas Cowboys. When the line actually opened on Sunday evening, the Bears were listed as 4-point underdogs. With Cutler expected to miss this week’s game, the Bears re-opened as 7.5-point underdogs. Although that suggests that Cutler is worth 3.5-4 points to the spread, that’s not entirely true.

“I’d say [Cutler] is still worth 2-3 points to the spread,” according to Scott Cooley, an Odds Consultant for Bookmaker.eu. “There is some consideration for the decimated defense. Those injuries are probably worth minimum a point. And certainly the fact that they are playing Dallas this week will impact the number. If they are playing the Jags, we wouldn’t need to adjust as greatly.”

There’s no doubt that the Bears defense is decimated. Pernell McPhee (Knee), Lamarr Houston (Knee) and Danny Trevathan (Thumb) have already been ruled out, while Eddie Goldman (Ankle), Adrian Amos (Concussion) and Kyle Fuller (Knee) are all listed as questionable. Very few individual defensive players are capable of moving the line, but the absence of several starters justifies the line move.

The Dallas Cowboys are consistently one of the most popular teams in football, but early public bets have been taking the Bears. After re-opening as 7.5-point underdogs at the Westgate Superbook, the Bears have received 57% of spread bets and 90% of total dollars wagered. This influx of public money has caused the Bears to move from +7.5 to +7.

Clearly bettors are excited to back the Bears without Jay Cutler behind center, and it’s easy to see why. Since entering the league in 2006, Cutler has gone 54-81 ATS (40.0%) with -29.82 units lost — far and away the worst record in football. Interestingly, Cutler has posted a much better record with the Bears than he did with the Broncos.

The table below displays how the Bears futures have changed in the aftermath of Cutler’s injury.

We will continue to monitor these lines and trends, and it will be interesting to see whether public bettors continue to take the Bears. For the latest odds, betting trends, injury updates and more, bettors can check out our free NFL odds page.