How Do Elite MLB Hitters Impact The Moneyline? 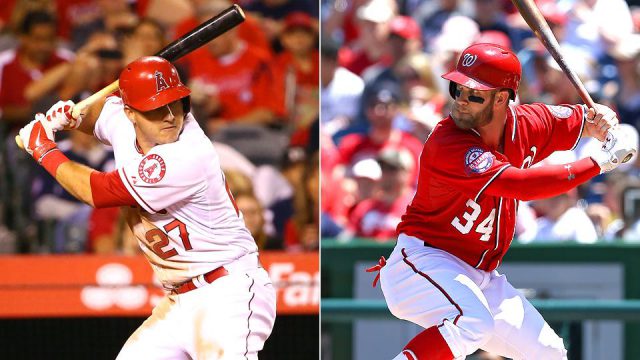 How Do Elite MLB Hitters Impact The Moneyline?

Before the start of the 2015 MLB season, there was no debate about the best player in the league — Mike Trout was the obvious choice. In his first three full seasons, Trout posted a triple-slash line of .311/.403/.561 with 93 home runs, 291 runs batted in and 98 stolen bases. Before turning 23, Trout already owned an MVP Award and two second place finishes. The next season changed everything.

Although Trout continued his blistering pace in 2015 (.299/.402/.590), another young star shined even brighter: Bryce Harper. The Nationals outfielder was the first overall pick in the 2010 MLB Draft, and made his big league debut just two years later in 2012. Over his first three seasons, Harper slashed .272/.351/.465 with 55 home runs and 31 stolen bases. That would have been impressive for most players his age, but expectations were sky high for the player who graced the cover of Sports Illustrated at age 16.

Most fans had already crowned Mike Trout as the best player in baseball, but Harper’s 2015 campaign quickly shifted that narrative. The 6’3″ lefty slashed .330/.460/.649 with 42 home runs en route to winning the MVP Award. That led to speculation that Harper had surpassed Trout, and would potentially become baseball’s first $400 million man.

I wanted to know which player the oddsmakers believed was more valuable so I reached out to Scott Cooley, an Odds Consultant for the market-setting Bookmaker.eu. “Mike Trout is the most valuable player in the eyes of the oddsmakers,” said Cooley. “A player’s offensive contribution is weighted heavily, but we also take into account what they bring to the table defensively.”

Even if Harper is considered the superior hitter — and that’s still highly debatable — there’s no doubt that Trout has the edge defensively. Trout’s DEF rating, which measures a player’s defensive value relative to the league average, has dwarfed Harper’s over their respective careers. Since joining the league, Trout has posted a 14.8 DEF rating while Harper has been subpar defensively with a -6.4 DEF rating.

I can conclusively state that Trout is the most valuable player in baseball, but what type of impact would his absence have on the moneyline? How many cents would the line drop if he was unexpectedly scratched from the starting lineup? Are there any other players that oddsmakers respect to this extent?

I speculated that the top tier would include also include the likes of Paul Goldschmidt, Josh Donaldson, Giancarlo Stanton and perhaps the younger trio of Manny Machado, Nolan Arenado and Carlos Correa. As it turns out, the list of highly respected positional players is much smaller. “After Trout, the next level is Harper and Goldschmidt,” according to Cooley. “Those top-flight guys are worth 7-10 cents to a line.”

There are many variables that go into setting and adjusting the line. For example, if the Angels are huge favorites then the absence of Trout wouldn’t be wouldn’t be as impactful to the moneyline. If they were even money, you would potentially see the line move 10 cents.

Some bettors may be surprised to see that the league’s best players are only worth a maximum of 10 cents — especially when compared to the value of NBA stars. My earlier research found that LeBron James is worth 5-6 points to the spread and Stephen Curry is worth 3-4 points to the spread. So why do MLB positional players have such limited impact on the moneyline?

“Baseball is such a team sport, and the success is largely dependent on the pitchers’ performances,” stated Cooley. “In basketball, losing one of the five starters is going to have an effect on the overall flow of the team. Sure, there are 11 players on one side of the football field, but for the most part the quarterback is really the only player that is going to impact a line.”

Even a minor pitching change can cause the line to change dramatically. As an example, earlier this season the Nationals immediately dropped from -230 to -185 when Stephen Strasburg was scratched and replaced with Tanner Roark. That’s a 45-cent move. In a less extreme example, the Reds moved from +130 to +165 when Raisel Iglesias was replaced by Tim Adleman.

Starting pitchers are easily the most influential players on the moneyline, and the hitters typically have only four or five plate appearances every game. Players like Mike Trout and Bryce Harper will grab headlines when they’re out of the lineup, but their actual impact on the line is only 7-10 cents.

Bettors can frequently beat the books on lineup news, so be sure to follow us on twitter and visit our free MLB injury page for the latest updates. Keep up with the latest odds, trends, and more by visiting our free MLB odds page.