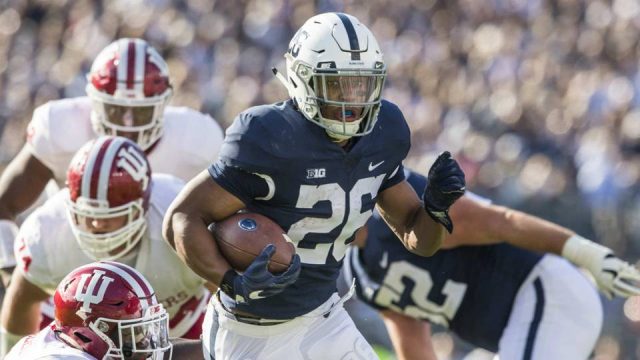 In NCAA Football
By Danny Donahue

The Heisman favorites continue to distance themselves from the pack, as we’re now down to just two players inside of 8/1 odds to win the award. Saquon Barkley had 2 TDs on Saturday, though neither was by way of a rush or reception. Instead, he returned the opening kickoff 98 yards for a touchdown, and later threw a 16-yard touchdown pass to improve his career completion percentage to 100%.

In the process his BetOnline odds jumped from +250 to +125. Let’s take a look at how the rest of the list was shaken up this weekend.

Baker Mayfield’s Sooners didn’t play this weekend, but his odds still improved despite another strong game from Mason Rudolph. Rudolph completed 27 of 38 for 376 yards and 3 TDs at Texas Tech, but saw his chances fall to +800.

The two biggest jumps on the list both came from the Pac-12. Stanford running back Bryce Love has climbed into the top five at +1400. After rushing for 301 yards this Saturday vs. Arizona State, Love now has 1,088 rushing yards on the season, by far the most in the FBS.

Washington State quarterback Luke Falk is also back in the Heisman conversation following WSU’s huge home win over USC Friday night. Falk was unlisted the past few weeks, but shot up to +2000 after throwing for 340 yards and 2 touchdowns against the Trojans.

Barkley and Mayfield have undoubtedly been the most impressive players in college football to this point, and are deserving of their respective positions at the top of this list. But this being only five games into the season, I don’t see any value in taking either of them to win the award. Instead I’d be looking at someone like Love, who has potential to see his chances greatly improve as he quickly becomes a household name.

What do you think? Is there still value in taking one of the front-runners? Do any dark horses stand out? Let us know in the comment section or reply to us on Twitter @SportsInsights.