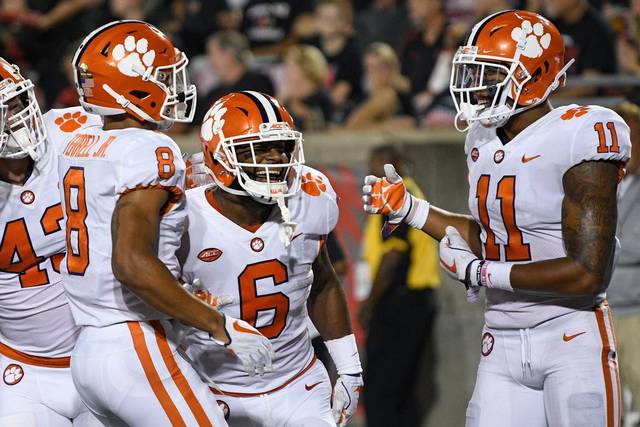 In NCAA Football
By Danny Donahue

A few fairly major question marks surrounded Clemson heading into 2017. For one, how would they replace star QB Deshaun Watson? Sure, it seemed that Kelly Bryant would ultimately win the job, but it was essentially an open competition all offseason. The Tigers suffered other major losses as well, including WR Mike Williams and TE Jordan Leggett, and returned only 12 starters from their 2016 Championship squad.

We figured we’d know by the end of Week 3, after playing Auburn and Louisville back to back, if they could really contend again.

Well, Week 3 is now in the books, and the oddsmakers have spoken. After Saturday’s 47-21 beatdown in Louisville, Clemson is now one of only four teams with better than 10/1 odds to win the title, along with Bama, USC, and Oklahoma.

While the rest of the college football world beats up on itself, Alabama’s odds have quietly been improving week by week. The Tide are now inside 2/1 for the first time this season.

In a case of taking advantage of overreactions, last week we highlighted Ohio State as having value at +1600 following their big loss to Oklahoma. As it turned out, a 38-7 home victory over Army–as 31.5 point favorites–was all it took to get the Buckeyes (+1000) back to having the best title odds in the Big Ten.

In a similar potential overreaction spot this week is LSU. After being embarrassed by Mississippi State 37-7, the Tigers have fallen from +1600 to +5000. Being an in-conference game, and that conference being the SEC West, this loss is more impactful than Ohio State’s loss last weekend. But, with LSU’s next two opponents being Syracuse and Troy, and with what we saw from Ohio State’s measly win over Army, +5000 may end up looking like a great price just a couple weeks from now.

What do you think? Is a Clemson repeat in the making? Can LSU still be considered a value play, or are they title chances officially down the drain after this past weekend? Leave your thoughts in the comment section or reach out to us on Twitter @SportsInsights.