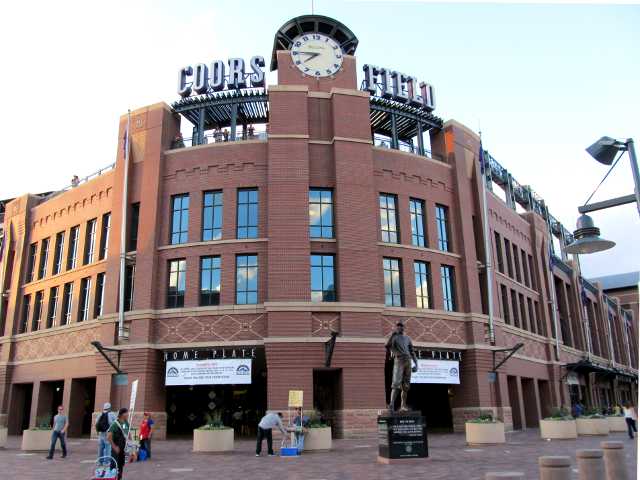 Since opening in 1995, Coors Field in downtown Denver, Colorado has been known as the most extreme hitters’ park in baseball thanks largely to its high altitude. Located one mile above sea level, the lower air density reduces drag and causes the ball to travel approximately 5% farther than ballparks located at sea level.

According to our Bet Labs software, the over has gone 477-407 (54.0%) in games played at Coors Field since 2005 — the best mark of any active stadium. Over that same stretch, there have been 2,831 games where the total (over/under) closed at 10 or higher at Pinnacle. From that sample, 500 games were played at Coors Field. That means 17.66% of all games with double-digit totals have taken place at the Rockies home stadium.

In the past, I have explained how bettors can find value by taking late season overs at Coors Field, but with the introduction of several new betting filters I wanted to determine whether another longtime myth could be debunked and subsequently exploited by bettors.

For years there has been a narrative propagated that fly ball pitchers cannot succeed at Coors Field. Many mainstream writers have stated that the Rockies should not draft and develop pitchers with high fly ball and strikeout tendencies, instead focusing on pitchers who induce ground balls. The theory was that despite a spacious outfield and game balls stored in a humidor, the mile high air would lead to cheap home runs from Colorado’s opponents.

There has always been a trade-off between fly ball and ground ball pitchers. More fly balls turn into outs than ground balls, but the outcome is rarely extra bases. I have also observed teams like the Los Angeles Angels who turn out consistent winning seasons despite some of the highest fly ball rates in baseball. This raised the possibility that ground ball pitchers could be overvalued, and public perception could magnify that edge in games played at Coors Field.

In the past, the Rockies have paid top dollars for free agent pitchers like Mike Hampton and Denny Neagles. These were fly ball pitchers, and they were unqualified busts during their time in Colorado. However, it seems like casual bettors are placing too much importance on these marquee signings as opposed to looking at the bigger picture. This selective perception can be exploited by opportunistic bettors.

Bettors can find value by taking viewpoints that run counter to mainstream narratives. This ideology is exemplified by our betting against the public systems, but there are countless ways to employ a contrarian betting strategy. A successful contrarian bettor typically questions conventional wisdom and challenges widely-held beliefs. Sportsbooks are excellent at predicting where they’re going to get action on each game, and they shade their lines accordingly. These shaded lines create additional value for bettors who dare to go against the grain.

Starting pitchers constantly lament that the dry, humidity-free air causes breaking balls (like curve balls and sliders) to behave in unorthodox ways. Studies have validated these complaints, claiming that these pitches break nearly 20% less than they would at sea level. For that reason, Rockies management has consistently targeted sinker ball pitchers.

Pitchers like Aaron Cook, Brett Anderson, Jorge De La Rosa, Jhoulys Chacin and Kyle Kendricks have fit the profile as pitchers who induce ground balls at rates above the league average, but I speculated that it would be very profitable to fade these types of pitchers at Coors Field.

After being signed as a free agent Kyle Kendrick said, “I don’t have any issues pitching in Colorado. If you can keep the ball down and pitch for ground balls, you’re going to get outs.” This quote summarized the sentiment of most square bettors; take pitchers who induce ground balls and limit the number of fly balls. Employing a contrarian approach, we believed that the exact opposite would be true.

[ Copy this system from the Bet Labs Think Tank ]

Fading pitchers with a ground ball rate of at least 55% has been profitable for both the Rockies and their opponents, although we should note that underdogs fitting these criteria have been particularly lucrative. Since 2005, underdogs facing extreme ground ball pitchers have produced a 23.1% return on investment (ROI) at Coors Field.

The league average home run to fly ball ratio (HR/FB) is around 10% and I further believed that most bettors would overvalue pitchers who maintained low fly ball rates. This goes against traditional logic which indicates that bettors should avoid fly ball prone pitchers in the mile-high air, but that’s part of the contrarian philosophy at Sports Insights. Whenever the public zigs, we zag.

After hiding any games where both pitchers fit the criteria (since it will always produce a 1-1 record), we found that starting pitchers with a fly ball rate of less than 25% have gone 75-85 with -14.77 units lost. By betting against those pitchers, we’re able to create another profitable betting system with a double-digit ROI.

[ Copy this system from the Bet Labs Think Tank ]

Clearly there has been value fading ground ball pitchers at Coors Field, but what about pitchers with excellent control and filthy stuff? In one of the more popular systems from the Think Tank, Bet Labs manager Travis Reed identified value by taking pitchers with high strikeout rates and low walk rates. I believed that the importance of recording outs without putting the ball in play and limiting free bases would be magnified by these high altitudes and high scores.

My research found that pitchers with an elite strikeout rate have produced a 3% ROI in games played at Coors Field while pitchers with an elite walk rate have been even more lucrative with a 7.2% ROI. When the starting pitcher has dominant stuff and immaculate control, the return on investment skyrockets to 31.4%. Although we can’t provide the optimal range here, bettors can copy this system from the Bet Labs Think Tank.

Ever since the ballpark opened, Coors Field has been one of the most puzzling riddles for nearly every pitching staff. The Rockies team ERA has cracked the top ten in the National League just twice in 23 seasons, and there are only 15 teams overall! This is a team that made the World Series in 2007 without a single starter boasting a sub-4 ERA.

There’s no doubt that scoring increases at Coors Field, but the perception that ground ball pitchers thrive at high altitudes is utterly false. Bettors should be looking to fade high ground ball/low fly ball pitchers and hammering control pitchers that are able to maximize strikeouts and minimize walks.

Readers can create five free systems at BetLabsSports.com, and anybody interested in copying these systems and receiving current games matches can try Bet Labs for just $49.