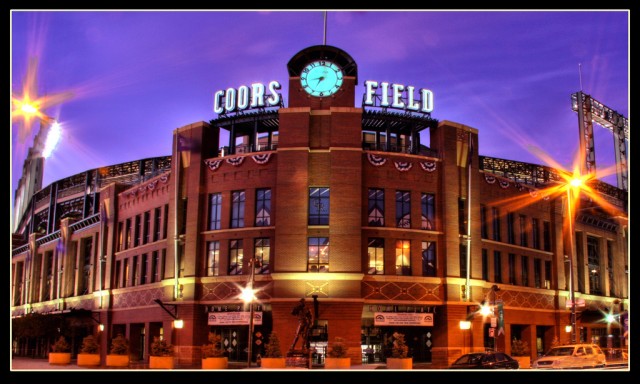 Last season after the All-Star break, we published an article examining how bettors could build their bankroll by taking overs at Coors Field. The Colorado Rockies ballpark is famous for being the most hitter-friendly stadium in baseball, and the main reason for these high-scoring games and lofty totals is the thin air in Denver.

Most people probably know that high altitudes create lower air density, but they may not realize the full effect of the mile-high air. Due to the reduced drag created by thin air, the ball travels significantly farther at Coors Field than it does at other stadiums. To be precise, baseballs in Colorado travel roughly 5% farther than at ballparks located at sea level.

While most fans may realize that hitters benefit from the mile-high air, they may not realize how lower air density adversely affects pitchers. Although baseballs move quicker in Coors Field, the air density can have an extremely detrimental impact on breaking balls. For example, a curveball is said to break approximately 20% less in Colorado as opposed to a ballpark located at sea level. That means that not only will a batted ball travel farther, but also that a pitcher with a huge curveball or sweeping slider will become far less effective.

While many breaking balls may look like beach balls to hitters at Coors Field, the average fastball actually drops significantly more at Coors Field. For this reason, the Rockies have traditionally targeted pitchers featuring plus fastballs, cutters, splitters and sinkers.

Starting in 2002, the Rockies began using a humidor to compensate for the fact that their home run rate was substantially higher than any other team in the league. The humidor makes the ball softer and heavier because they have absorbed additional moisture, but this has hardly affected the Coors Field advantage. As a team the Rockies are slashing .303/.357/.487 at home but have struggled with a .241/.289/.393 line on the road. Although home run rates at Coors have dropped since the humidor was first implemented, Colorado remains arguably the most hitter friendly destination in baseball.

We hypothesized that the over would be profitable at Coors Field but, knowing that humidity levels increase during the summer, we hypothesized that they would be particularly profitable during the late season. Our theory was quickly validated as we were able to create an over betting system which produced 129-79 record (+45.36 units) from 2005-2013. Although this system went 16-7 with +7.58 units last season, we wanted to make a few minor tweaks in order to maximize our profits.

By including postseason games and increasing the upper limits of our closing total range from 10.5 to 11 we were able to increase our overall units won from +52.94 to +57.38 without adversely affecting the return on investment (ROI).

Our new system also maintains the three most important characteristics of a winning betting system: strong driving hypothesis, large sample size and consistent year-to-year results. This system has had losing years in 2009 (16-16, -0.41 units) and 2005 (3-5, -2.48 units), but has otherwise seen steady gains each season. It has been particularly lucrative in recent years, posting a 52-22 record (+26.98 units) over the past three seasons.

To summarize, higher altitudes lead to a decrease in air pressure which causes less drag on the baseball. This decrease in drag causes the baseball to travel farther which explains why games are so high-scoring in Coors Field where the elevation is 5,280 feet. As humidity rises, that air density continues to decrease which amplifies this already significant trend.