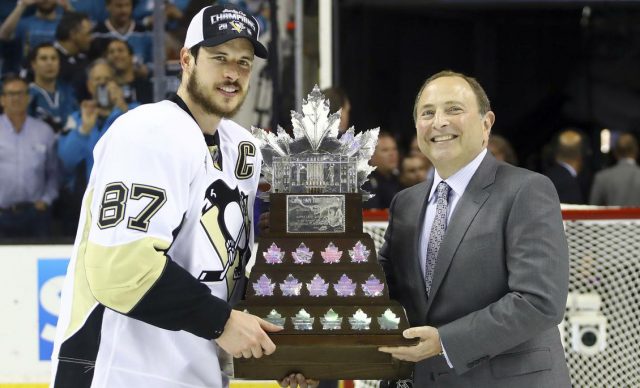 The 2017 Stanley Cup Playoffs have been full of overtimes, and it took double-overtime in Game 7 for the Penguins to advance past the Senators. In the Cup Final, Pittsburgh takes on Nashville and the table below compares the opening Conn Smythe odds throughout the playoffs.

Heading into the Stanley Cup Final, Nashville goalie Pekka Rinne is the favorite at +200 odds, followed by Penguins Evgeni Malkin (+225) and Sidney Crosby (+260).

Below was written on May 11, 2017 prior to the Conference Finals:

Now that we’re down to the final four teams, Pittsburgh’s Evgeni Malkin and Anaheim’s Ryan Getzlaf are +500 co-favorites to win the Conn Smythe. However, next on the list is Nashville’s Pekka Rinne (+550) and Ottawa’s Erik Karlsson (+650), so each team has a representative in the top four favorites.

Below was written on April 11, 2017 before the start of the Playoffs:

Every year the league hands out the Conn Smythe Trophy to the playoff MVP and this season Sidney Crosby and Patrick Kane (+850) opened as the co-favorites at Paddy Power to win this prestigious award. The odds for Crosby are fairly ridiculous when you consider that the Penguins are also listed as +850 to win the Stanley Cup, but that’s one of the many flaws with these types of prop bets. Similarly, Conor McDavid is +1200 to win the Conn Smythe while the Oilers actually have longer odds (+1525) of winning the Stanley Cup.

Later in the day, the Westgate Las Vegas Superbook posted Conn Smythe odds with several notable discrepancies. A pair of Capitals players (Alex Ovechkin and Braden Holtby) were listed as +800 co-favorites with Kane (+1200) and Crosby (+1500) right behind them. Ottawa’s Erik Karlsson, who was listed at 22/1 at Paddy Power, is unlisted at the Westgate. Devan Dubnyk, who was +900 at the Paddy Power, is listed at +2500 at the Westgate. This once again highlights the importance of having access to multiple sportsbooks and shopping for the best line.

Last season Sidney Crosby entered the playoffs listed at +1600 to win the Conn Smythe Trophy, but he was the obvious choice (sorry Phil Kessel) when the Penguins won the Stanley Cup. For what it’s worth, the trophy has been won sixteen times by centers, sixteen times by goaltenders, nine times by defensemen, and eight times by a winger. In fact, only one left wing (Bob Gainey in 1979) has ever won the award.

Planning to bet on the NHL Playoffs? Be sure to bookmark our free NHL odds page to track the latest lines, public betting trends, and injury updates for each game.