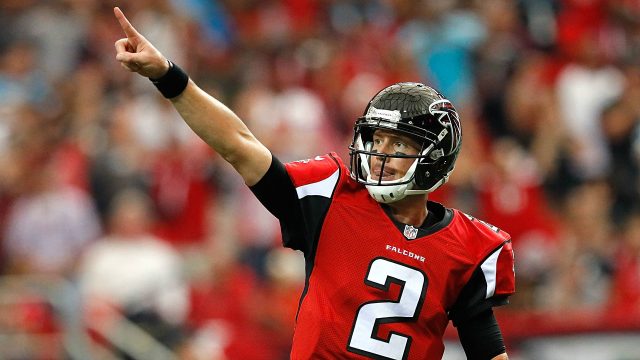 Last season Atlanta Falcons quarterback Matt Ryan threw for 4,944 yards with 38 touchdowns and 7 interceptions while leading his team to an 11-5 regular season record and the NFC South crown. Although they ultimately lost to the New England Patriots in Super Bowl 51, Ryan earned his first career MVP Award for that spectacular regular season performance. Bettors who had faith in the former Boston College standout were rewarded handsomely, as Ryan was available between 90/1 and 135/1 to win the NFL MVP Award prior to the start of the season.

Since the award was first handed out in 1957, more quarterbacks have won this award (40) than all other positions combined (21). Included in those other winners are 18 running backs, one defensive tackle (Alan Page in 1971), one place kicker (Mark Moseley in 1982) and one linebacker (Lawrence Taylor in 1986). Since 95% of past winners have been either running backs or quarterbacks, bettors may want to avoid placing a wager on some of the league’s most electric wide receivers like Antonio Brown, Julio Jones, and Odell Beckham Jr.

The table below displays the past MVP winners along with their preseason odds.

On Monday (6/27) morning, Bovada released odds for the 2017 NFL MVP with Ryan (+1600) listed with the seventh-best odds. Interestingly, all six players with shorter odds are quarterbacks including the favorite, Tom Brady at +450. Packers quarterback Aaron Rodgers (+700) enters the season with the second-best odds for the third consecutive season.

The table below examines the current NFL MVP odds from around the market. It will be updated as more information becomes available.

Although these odds will likely change dramatically by the time the regular season rolls around, there are several players that appear to be offering value. One of my personal favorites is Andrew Luck, who’s currently available at 25/1.

Last season Luck struggled with injuries but still managed to rack up 4,240 passing yards and 33 total touchdowns while posting a career-high 63.5% completion percentage. The Colts offensive line has been rightfully scrutinized in the past, but this unit should (finally) see some stability this season. New general manager Chris Ballard has also improved the team’s defense over the offseason, which should take some pressure off Luck.

I’m not particularly optimistic about the Colts’ competition in the AFC South, and I think Indianapolis should be a playoff team this season. Luck is a top-five quarterback when he’s healthy, and he’s capable of posting massive statistics — especially if T.Y. Hilton and Donte Moncrief can both stay healthy all year. Luck was the MVP favorite just three years ago, and I think people may be overreacting to some of his recent struggles. It will be interesting to see where other books open, but Luck is a player to watch at 25/1.

Which players do you think are offering value? Do you think that Matt Ryan will be able repeat? Please leave your thoughts in the comment section below.