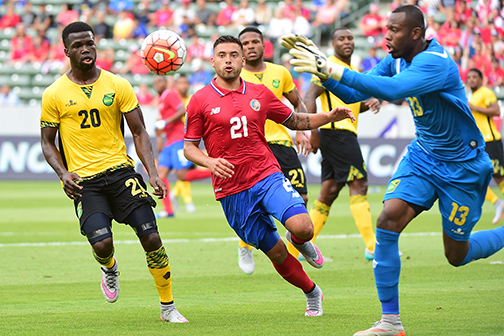 The 2017 Gold Cup is a summer tournament consisting of 12 CONCACAF teams, starting on July 7th and concluding on July 26th. The Gold Cup is every two years and will be hosted by the United States in 2017. The 12 teams are split into three groups– the top two teams from every group advance to the next round, as well as the two best third-place squads. Basically 8 of the 12 teams will advance from their group into the knockout stage. Here are the three groups and odds to win each group for this year’s Gold Cup:

I don’t see much value anywhere in the group stage– if you like USA to win, you’re probably better off taking them to beat Panama in the opener at -135 odds. If they draw or lose to Panama, then you’ll definitely be able to get better odds on the USA to win the group, so pass on the -455.

Mexico is priced about right but again, you’re probably better off taking them in individual games rather than -500. My pick to win the whole tourney is Costa Rica at +725 but I don’t love them to win the group.

Despite having home-field advantage, USA (+160) are listed behind Mexico (+130) to win the entire tournament. Here are odds for all 12 countries via 5Dimes:

The preview and value play below was written on June 29:

The Gold Cup has been dominated by Mexico and USA historically– Mexico won in 2015 and have won 3 of the last 4 tournaments. USA won back in 2013 and also won consecutive Gold Cups in 2005 and 2007. Canada is the only other CONCACAF nation to win a Gold Cup, back in 2000.

This tournament also provides a chance to get younger players some experience, and Mexico’s squad will be very different from the one they took to the Confederations Cup in Russia. USA won’t have their full squad either, but most of their players come from the MLS which is in mid-season. USA also have home-field advantage which should be hugely beneficial on a game-to-game basis.

I’d lean toward betting USA +160 over Mexico +130 to win it all, but I think a more worthy bet to make before the tournament is Costa Rica +725 (current odds at 5Dimes). They made a nice run in the 2014 World Cup and have an in-tact squad with a nice mix of players from the MLS and overseas. They’re clearly the third-best squad and if they can simply reach a final, +725 is a great price to be able to hedge down the line.